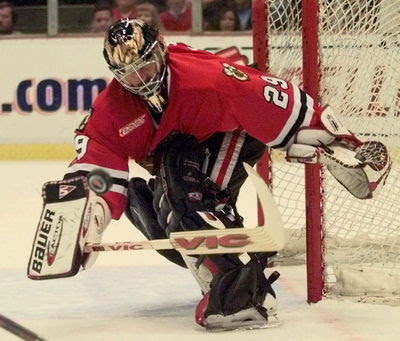 As we get more and more hard-up for AGMs, this one kind of jumped out because of the fact it's the second occurrence were a goalie had a mystery illness that turned out to be some kind of poisoning. Kind of an odd happenstance, but just made me wonder if it was the same person or not-- it wasn't. In any case, this AGM went from outhouse to penthouse to midhouse through his career. This week, Steve Passmore gets the AGM treatment.

Passmore's career got off to a bit of a slow start, as he played in Midget AAA with the West Island Deltas for the 1988-89 and 1989-90 season, getting two call-ups to the Tri-City Americans in both seasons totaling five games and an 0-1-0 record.

Passmore would get a better chance to display himself when he was traded to the Victoria Cougars for the 1990-91 season. However, the team in front of him was a dismal one, as he would play 35 games, but compile a 3-25-1 record. The next season, Passmore would be the starter, but the result was still horrid. In 71 games, Passmore would finish with a 15-50-5 record, not seeing time in only one game that season. That season didn't seem to deter the Quebec Nordiques, who drafted him in the 9th Round of the 1992 Draft.

Passmore would be back in net for the 1992-93 season for Victoria, at least for 43 games (14-24-2), before he was dealt to the Kamloops Blazers for the last 25 games of the season (19-6-0), then going 4-2 in seven playoff games. The momentum for Passmore in Kamloops would continue, though he would play behind Rod Branch in the 1993-94 season, he would get in 36 games with a 22-9-2 record. Passmore had the hot hand heading into the playoffs, and would go 11-7 in the playoffs to help the Blazers win the WHL title, as well as the Playoff MVP award. The Blazers would go into the Memorial Cup, where Passmore would play all four games, winning them all and hoisting the Memorial Cup for the Blazers, on a team that had the likes of Jarome Iginla, Darcy Tucker, Brad Lukowich, and Hnat Domenichelli.

During that season, however, Passmore had been traded from Quebec to the Edmonton Oilers. Passmore would start his pro career with the Cape Breton Oilers of the AHL in the 1994-95 season, going 8-13-3 in his 25 games in his first pro-season. The next season, however, would see Passmore only play two games, going 1-0-0, but it was for a good reason.

During training, Passmore was dealing with severe muscle cramping and was forced to sit out. Not knowing what it was, he was tested and it was found that he had heavy metal poisoning. According to reports, there were unhealthy levels of copper, arsenic, magnesium, and antimony in his system that threatened his career. Luckily, a cure was found and he was able to continue playing.

The Oilers relocated their AHL team to Hamilton and renamed them the Bulldogs, but Passmore was still there for the 1996-97 season. Passmore would play 27 games with a 12-12-3 record and would get the call in the playoffs, going 12-10, where the Bulldogs would lose to the Hershey Bears in the Calder Cup finals. Passmore would also see time with the Raleigh Ice Caps of the ECHL for two games with a 1-1-0 record. The 1997-98 season saw Passmore start off with the IHL's San Antonio Dragons for 14 games, with a 3-8-2 record; before he was called up to Hamilton. With the Bulldogs, Passmore would put up a 11-10-6 record in 27 games. He would also get the call again in the playoffs, this time having a 0-2 record in three playoff games. The 1998-99 season saw Passmore back in Hamilton, where he would play in 54 games with a 24-21-7 record and he would finally get his call-up to Edmonton towards the end of the season, playing in six games, sporting a 1-4-1 record. Passmore would return to Edmonton for the playoffs, playing in 11 games with a 5-6 record.

Passmore would sign with the Chicago Blackhawks for the 1999-2000 season, where he would back-up Jocelyn Thibault. He would get in 24 games with a 7-12-3 record in Chicago, while playing in two games for the Cleveland Lumberjacks of the IHL going 1-0-1 in conditioning stints.

With no NHL in 2004-05, Passmore would go overseas and play for Alder Mannheim in Germany, playing in 21 games with a 2.59 GAA. The Phoenix Coyotes would sign Passmore for the 2005-06 season, but would play in the AHL with the San Antonio Rampage, going 4-6-0 in 11 games before leaving the team and heading to Finland to play for Jokerit Helsinki, where he would win five in his 15 games played. Passmore would stay over in Europe for the 2006-07 season, playing in Austria for Graz EC for 25 games, then moving to Italy to play for Milan for eight games before finally hanging up the pads.

After his playing career, Passmore went back to Kamloops to become the goaltending coach for the Blazers, but has since been relieved of his duties.

For a guy who went from a craptastic team in junior to a Memorial Cup champion, to blood disease that threatened his career to a solid job in the minors, coupled with a so-so NHL career, you can't say Passmore's career in retrospect lacked roller-coaster moments. In fact, he also has a few fights to his resume against Steve Shields, Garth Snow, and Dan Cloutier, so that's something, too. Those fights and the blood disorder shows the kind of fight that Passmore had in him when all is said and done.
Posted by ScottyWazz at 8:15 AM

Passmore was actually a pretty decent goalie but always played on bad teams. He was a very energetic gritty goalie and worked hard.