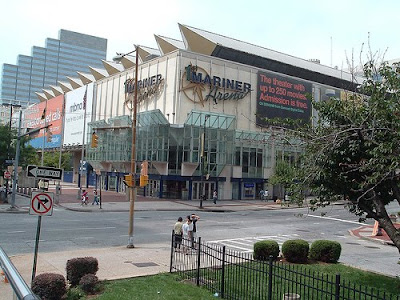 It was speculated by the Baltimore Sun and confirmed by Washington Post's DC Sports Bog; the Washington Capitals will play an exhibition game in Baltimore's First Mariner Arena, mostly likely against the Nashville Predators, whose coach-- Barry Trotz-- is a former Baltimore Skipjacks' coach. This is also coming on the heels of the Bog talking about how Baltimore fans are supporting the Caps in Baltimore bars-- with a picture of some of my former teammates there.

I've documented the history of Baltimore hockey and why the city probably won't be a site for NHL relocation if they get a new arena-- but if there is a solid turnout, could this be wishful thinking about a minor league club down the line??

Short answer, no. Long answer, still no; but with a "but."

First and foremost, if this game pans out like the Caps think it will with a Baltimore crowd, then it could set wheels in motion for the Baltimore area to get a new arena, as First Mariner has been there in downtown since 1962. There has been talks about there being a new arena built in the Canton area, but it has since moved to the downtown core, extending from the Convention Center-- but could cost $1BILLION dollars for the 18,500 seat arena. That's quite a lot of butts to fit into an arena for a minor league game, but it'd probably be used mostly for concerts and other events, like wrestling. Even so, an upgraded place could be a nice attraction to some minor league teams having issues in their current area.

Yet, even if there is an interest team-- the Baltimore Blast own the city when it comes to indoor excitement. The indoor soccer team would probably want to command most of the weekend dates, which would hamstring any hockey team wanting to go there due to the fact that weekday games aren't that much of a draw. Since the indoor soccer season goes from November to March, it'd be hard to have hockey and soccer get primo dates. If they are able to work it out together-- it may work, but who knows with everyone wanting the entertainment dollar for themselves. The Blast are one of the reasons why the Baltimore Bandits didn't last too long.

In the end, I don't know if hockey will work in Baltimore for the long-term, but it could be something that should be looked at. If there's a lot of people getting into the Caps from the Baltimore area, why not have a team locally to be closer and cheaper for some families who may not be able to afford trekking down to DC and deal with the NHL prices. Time will tell, but this could be a jumping off point for a hockey future in Baltimore.

(It should be noted that I hope there's some kind of Baltimore Skipjacks tribute, or else it would be unjust to play there. And Maryland goalie Matt Mitchell jokingly said he would give up his pads to a Caps goalie in order to be close to "the show.")
Posted by ScottyWazz at 9:15 PM