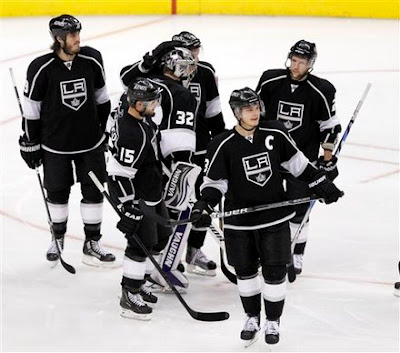 While trying to build from last year, the Los Angeles Kings looked primed to be the next big team out there to build themselves up from nothing to something big. That will have to wait another year, as they were eliminated by in-state rival San Jose Sharks. It was another case of a team's star player being injured and tampering with a long run in the playoffs.

Said injured player, Anze Kopitar, was again fantastic on both sides of the puck, but due to the unfortunate ankle injury, his season ended earlier than the Kings. Also, Dustin Brown was a solid performer, leading the team in goals. However, one issue could be what's to make of Wayne Simmonds, who didn't seem to have the buzz surrounding him as he did a year ago. While Simmonds only had a 10-point drop off, he didn't seem to have the same flair that got a lot of buzz around him last season. Maybe it was just a sophomore slump, but for many saying that Simmonds is going to be an explosive force for the Kings in their future-- it may be a hit in that progress. That said-- Justin Williams and trade-deadline addition Dustin Penner could help out the Kings for next season.

Defensively, Willie Mitchell was a solid pick-up for the Kings, although he missed 25 games due to injury and once Drew Doughty overcame his slow start, he and Jack Johnson were the offense for the defense. Doughty should be set for a nice raise, as he is a RFA this summer. Yet, another drop-off was Davis Drewiske, who was talked about a lot during last season; but was usurped by Alec Martinez; who is somewhat similar to Drewiske and could actually be one to be the next unknown defenseman who comes up and takes over without a lot of people taking notice.

One interesting note should be what will happen in goal, as Jonathan Quick didn't play horribly in the playoffs or in the season; but you have to wonder if Jonathan Bernier will start to pick-up some more games here and there. Granted Bernier may not be able to take the starting role away from Quick just yet-- he played well enough to get around 30 games in next season-- which depending on the play of both; may give us some interesting controversy or a two-headed monster that is unbeatable.

There are baby-steps in the process of progress, and the Kings are taking their steps. Luckily, with Brayden Schenn on the horizon, the future can only get better and could only take off from here. The question is whether or not all the promise in this team can actually be fulfilled or if this is a mirage of what could have been.
Posted by ScottyWazz at 9:35 AM