"Disbanding in the Desert" or "Ridding Relocation Rumors" 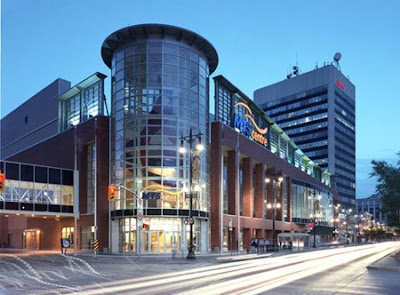 Is it wrong to think that if the Coyotes in fact move to Winnipeg for next season, as has been widely rumored, that this could be the end of relocation fascination for the next little while?? Are there cities out there that will be as adamant and serious as Winnipeg is to create a stir and "deathwatch" for teams in financial peril??

While you can't exclude the Quebec City flag-wavers, the fact is that unless they get a new facility, there isn't a chance they'd be included in the movement that the Winnipeg area has had in the past three or so years. Of course, we've mentioned Kansas City on this blog for a while, but that's because it has the facility for a team to move right in, but many think it could be the most Northern Sunbelt team out there, with the unknown of the support that could come from the region.

If it all comes to a head and the Coyotes do move, I think teams like the Florida Panthers, Atlanta Thrashers, and a few other teams with some issues in terms of making ends meet could breathe a bit easier when it comes to the relocation news. After Winnipeg and Quebec, there's not many other cities making noise to get a team-- which is really a disadvantage to owners looking to sell the team, not only because they don't have many potential investors to buy it from them, as well as not many destinations to threaten to move to.

Yet, we do need a break from all this talk and speculation. At this point, this whole scenario has gone on for the better part of four years and it's like we couldn't take another one of these situations. Of course, I don't know how vehemently a city would try to keep a team in town like the City of Glendale has been when it comes to the Coyotes; though Glendale does own the arena and the vested interest is definitely there because they don't want to lose their tenant. The Panthers could have Broward County put up some fight when it comes to leaving the BankAtlantic Center, but probably not to the point that Glendale has. Maybe it's for the best, though.

This whole Coyotes' mess is something that has been a long time coming, though it's not a definite that we're done with it all. Hopefully, one way or another, it will be ended and soon. It's been ludicrous how long this has taken, how many places it's been supposed to be moving to, and how many owners there have been to save this team. The worse part is that the fans have been dealing with all of the shenanigans and being pained at every twist and turn. If this has been a quick-rip, then it may not be as horrific for them-- but now, it's just too much for them to bear and they have the right to been as pissed off as they have been when it comes to this. Whether it's feeling bullied by outside interests groups or saying everyone is against them, because it's hard to deny either scenario.

Let's just hope if it's coming to an end-- it's soon so we can all go on with our lives and cope with it whatever way a person sees fit.
Posted by ScottyWazz at 11:25 AM