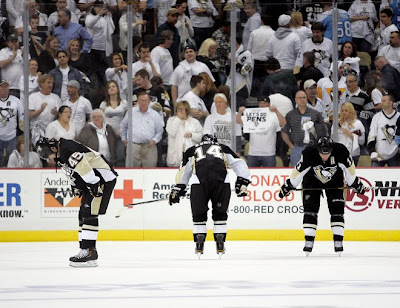 In what started off like a runaway championship season, coupled with a home outdoor game-- a series of unfortunate events came to fruition through the season and karma seemed to catch up to the Pens, who went up 3-1; but losing to the Tampa Bay Lightning in seven games.

While the loss of Sidney Crosby and Evgeni Malkin cannot go unnoticed, the team seemed to step up without them during the regular season and then in the start of the playoffs. While they couldn't catch up to the pace Crosby has, the likes of Chris Kunitz, Tyler Kennedy, and the trade deadline acquisition of James Neal was able to keep the Pens afloat, as well as almost taking the Atlantic Division crown. Pascal Dupris even added things to the offensive side while keeping up in his defensive responsibilities. However, there's a lot of question in regards to the likes of Dupris, Kennedy, Max Talbot, and Mike Rupp-- just to name a few; as they are free agents and it's a question of whether GM Ray Shero will keep their services as $55.7M is tied up in 17 players for next season, which-- even if the salary cap goes up, could be hard to juggle in keeping all the character players.

Luckily, the defensive side is all signed for next year-- lead by Kris Letang, who really jumped out of his shell and started to show the offensive side which the Pens sought when they drafted him. The new acquisitions of Zbynek Michalek and Paul Martin played solidly defensively, while Ben Lovejoy did while while playing the shuttle from press box to playing time, putting up 17 points in 47 games-- which could be a nice in-between from Letang and Martin. Also, Matt Niskanen, who came over with Neal, will also have a full-season to show off and see if he can get an extension with Pittsburgh.

In net, the Flower-- Marc-Andre Fleury-- was solid as always, continuing his solid play with his third straight year of 35+ wins, which was a little more meaningful this season, with many of the top guns out for the year and the goal-support not really there. A lot of fans were trying to campaign for the MVP nomination for Fleury, which would have been great for the team MVP, but overall-- may have been a stretch. Brent Johnson also was solid in his games, which included 13 wins and one KO decision-- which made him a folk hero in Pittsburgh, as did his role in Winter Classic 24/7.

As a whole, the season could have been a lot different if the Crosby and Malkin tandem were in the line-up for the full season; but the role guys shows their valor and showed their worth without their big guys in the line-up; and did a damn good job, as well.
Posted by ScottyWazz at 8:55 AM