On the Topic Of Playoff Psychology 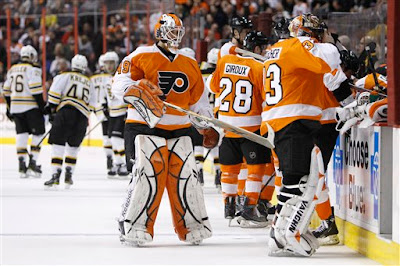 Is he in the game or the press box?? Will this guy start or will the back-up start?? The psychology of playoff hockey is alive and well, especially late into the series. Yet, at the same time-- does it ever work??

We've seen this kind of carousel before with the whole "upper/lower body injury" gimmick and it seems to have moved onward to trying to make a guessing game out of which goalie or player will start. While it make mess with the opposition, I don't know how well it works as we get into the elimination games.

There's plenty of times where the goalie switch and personnel switch happens in the first couple of games in order for motivate your own team and maybe give them some more jump to the team, as well as throwing a possible wrench in the opposition game plan. However, it seems a bit counterproductive for a team to still be playing this kind of game while the series drags on if it's not injury related. There comes a time where it's no longer a point to get a jump into a team, but starts to become a distraction and maybe shows the lack of confidence in the team, thus bringing the room down if players don't get motivated by it late into a series.

Not only that, but by the time the opposition has got a groove going, the odds are that you could throw any kind of gauntlet into their direction with roster changes and they would still be able to figure it out and overcome it; thus sending the team that made the change in for a loop and then second-guessing the decision making all around. The same thing to spark the team could also be the downfall of the team as well.

We'll see if these late-series gambles actually pay off, but even if it does-- wouldn't the cast of doubt start to linger on. Sure, it worked the first time and maybe a second time-- but if you go to the well too many times, it'll dry up and then you're stuck with nothing.
Posted by ScottyWazz at 11:40 AM

Email ThisBlogThis!Share to TwitterShare to FacebookShare to Pinterest
Labels: Coaches, Coaching Changes, Goaltending Controversy, NHL Playoffs, On the Topic Of...