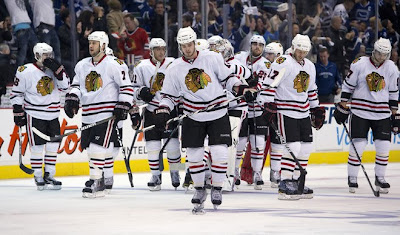 There were ups, downs, and a glimmer of hope-- but in the end, the defending Stanley Cup champions will not be back-to-back champs. While they had quite the uphill climb, they showed the heart of the champion in coming down from 0-3 in their series to push it to overtime in Game Seven against the top team in the NHL.

While a lot of the depth and character players left, the play of Jonathan Toews, Patrick Kane, and Patrick Sharp kept the offensive wheels going, while Marian Hossa provided some solid secondary scoring for the Hawks. While you can't replace guys like Andrew Ladd, Dustin Byfuglien, Kris Versteeg, and others-- Dave Bolland, Bryan Bickell, and Michael Frolik filled in the roles as best as they can. However, you bet that they're going to just fill in the pieces with the roster because of the salary cap and because they have their big players filled out for the long-term.

Back on the blue-line, Duncan Keith had quite the downturn, having half the goals as he did last year and was down 24 points from last year; although he had a hell of a playoff series against Vancouver. It could be a Norris Trophy season-long hangover, but expect a bounce-back for Keith. His partner in crime, Brent Seabrook had a career-points year; matching his career-high in goals and setting an assists high. His offensive spark came out and picked up the slack for Keith's short-comings. One bad sign was Brian Campbell, who set a post-lockout career-low in points, which at $7.14M a year for the next five years....could be an alarm or just hopeful that it's a small blip on the radar.

Yet the most interesting storyline was the same as last year-- an unknown goalie coming to take an establish goalie's spot. Corey Crawford has been in the Hawks' system for six seasons, finally getting his break and thanks to the shortcomings of Marty Turco, was able to shine for the Hawks and will probably create yet another conundrum, as Crawford is due for a raise as a RFA and it may be too much for the Hawks to afford, as they have 14 contracts at just over $51M, leaving little space for much of a raise. Hopefully something can get done, because Crawford looks like he could be the next big thing for the Hawks netminding woes.

It was a valiant effort for the Cup champions, but it seemed the emotion from the clawing back was what drained them in the end. Coach Joel Quenneville did what he could with the bad hand he was dealt. And they almost pulled it off, which would have been like a Cup victory for them.
Posted by ScottyWazz at 11:20 AM