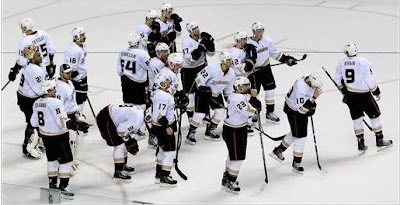 After the ups and downs of this season, after some injuries and uncertainty, the Anaheim Ducks had their luck come to an end, but luckily for them-- plenty of positives came out of it, though they were the first team with home-ice advantage to go out in the playoffs; which could be a cause of concern-- but nothing needing drastic changing.

The one issue is what's going to happen in net and whether or not Jonas Hiller is going to be able to return to form. As you may remember, Hiller had vertigo-like symptoms after the All-Star Game due to getting hit in the mask with a puck, but luckily the unlikely duo of Dan Ellis and Ray Emery were able to carry the workload and be a solid tandem down the stretch, but it seemed to fall off when the playoffs came. While Ellis is signed next year, Emery is a free agent and has shown he could be a solid insurance policy, all dependent upon what's up with Hiller. Emery is probably groomed to be a 1b goalie, which he may not get in Anaheim; while this may be a mirage for Ellis.

Offensively, there's little doubt that Corey Perry is now a big star, especially this year being the only 50-goal scorer in the NHL. That whole top line of Perry, Ryan Getzlaf, and Bobby Ryan could be in the running for the best lines in the NHL, which works out well with them being signed for the next two years together; they'll have more time to prove how well they can grow. A big question mark is whether or not Teemu Selanne will come back, and after the season he had (31g, 49a) and playoffs he had (6g, 1a)-- he'd almost be a fool not to come back with how well he's played. Though, at the same time-- he may want to go out while the gettin' is good and not tarnish what he built up this past year. That will probably be the biggest issue this off-season, whether or not Teemu will not only sign-- but be able to repeat this year's astonishing performance.

Cam Fowler was a kid who had to grow up on the spot, and while he had a feeling out process and while he still has to work with his defensive game (minus-25 this season) he will get better and better as the season goes along. All the while, Lubomir Visnovsky of all people, had an amazing year with 18 goals and 50 assists, leading all defensemen in the NHL in assists and points, while being second in goals. Added to his plus-18, his all around game was something that will give the Ducks hope and maybe a mentor for Fowler in the absence of Scott Niedermayer on the ice. Also, good for Fowler, was Toni Lydman, who was plus-32 on the year and could give the youngster some pointers.

As a whole, it was a bumpy ride for the start of the season; but at the end of the day-- they rode out the rest of the year; albeit they only lasted a short while. Randy Carlyle may have to re-look at this playoffs as something of a failure, but the season they had and the comeback from a dismal start showed character in a young team.
Posted by ScottyWazz at 6:30 AM