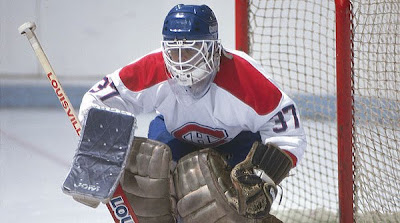 In the playoff fantasticness, we get to someone who has a Cup ring to his name; but doesn't have his name on the Cup itself. The fact he was injured most of his career was the downfall which left his name off the Cup and left his career as a footnote in hockey history, when it could have been so much more. This week-- the profile of Steve Penney.

As Penney turned pro, he went to the IHL's Flint Generals, which he thought would be a short-term assignment. However, after spending the 1981-82 and 1982-83 seasons there and playing 36 and 48 games respectively; but he didn't seem to be going anywhere fast being tucked away in the minors like that.

Come the 1983-84 season, Penney took one more shot at moving up, but said he was going to be stuck in Flint again, he would quit hockey and go back to delivering beer in Saint Foy, Quebec. Luckily, Penney was mentored by Jacques Plante and was able to play good enough to be placed in the AHL with the Nova Scotia Voyageurs. With Nova Scotia, Penney played 27 games going 11-12-4, while getting a call-up to Montreal for four games, losing all four.

Yet, with Jacques Lemaire behind the Habs bench and hating the inconsistency from his current goaltending, Penney got some more chances. That shine in the 1984 Playoffs, where Penney got 15 games in, going 9-6 and cementing his role with the team. Penney would get the starter's role in 1984-85, playing in 54 games while sporting a 26-18-8 record, then going 6-6 in 12 playoff games. Penney got All-Rookie Team honors that year. The 1985-86 season started promising, but he would slip into the back-up role with the Habs as a young upstart named Patrick Roy came busting on the scene, as did a serious knee injury that limited Penney to 18 games (6-8-2). While the Habs won the Stanley Cup in 1986, Penney didn't have enough games in to get his name on the Cup, he did have an injury exemption-- but the Habs didn't use it. Penney got a Cup ring and had his picture in the team picture with the trophy-- but not engraved on the Cup. That said-- Penney was deemed expendable thanks to Roy's heroics and his own injury woes.

In August of 1986, Penney was traded to the Winnipeg Jets for Brian Hayward, another AGM. The 1986-87 season saw Penney get very limited time in Winnipeg, going 1-4-1 in seven games with the Jets, as other AGM inductees "Pokey and the Bandit" (Pokey Reddick and Daniel Berthiuame) were taking most of the time. Penney also spend '86-'87 with the Sherbrooke Canadiens for four games-- going 1-2-1. More of the same in the 1987-88 season, though Penney played most of his days with the Moncton Hawks, going 9-14-4 in 28 games, then going 2-4-1 in eight games as a call-up from Winnipeg. After that season, Penney hung up his pads and retired.

At last check-in, Penney was working as a sales representative for an eye-glass framing company.

While he rose to stardom and notoriety quickly, injuries and other goaltenders jumping onto the scene hurt Penney's chances as longevity. Many thought he was going to be the next Ken Dryden after his big playoff run; but if nothing else-- the injuries were the reason that Patrick Roy was able to launch into stardom and allowed him to get into games and hone his craft at a young age. I'm sure that Penney doesn't want to be remembered as the guy before Roy started....but it's better than nothing, I suppose.
Posted by ScottyWazz at 8:00 AM