The Lost City of Kansas City 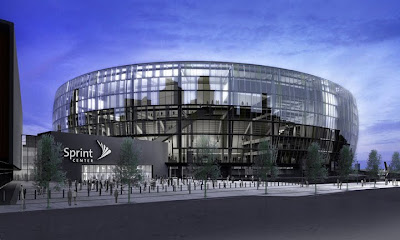 To paraphrase Scott Levy: "What about us?? What about Kansas City??"

Lost in all the of the uproar of Winnipeg and Quebec City being the destination for the next team on the move in the NHL is Kansas City, Missouri. While the Sprint Center laying in the downtown core collecting dust when it's not arena football season, that city could be a solid location for a NHL team to come and enjoy the state of the art arena and in a city that has a somewhat solid location and is readily recognizable to the casual person.

Granted, the thought of this situation not being any better than the situation a team could be coming out of, as well as the rampant fan-base not being as on top of things like the Canadian counterparts, but it's just odd how they were very high in the bidding when it came to Nashville, Pittsburgh, recently with the Islanders, and mentioned when the Phoenix Coyotes' thing was still new; but now-- they've gone silent. There really hasn't had been much, if any, talk from Paul McGannon and his NHL 21 contingency about the recent developments on the relocating franchises.

Yet, it falls back on whether placing a team in another market that doesn't have the hockey heat as a Canadian site or another US market will always be one that looms over the Kansas City bid, though McGannon and his team are passionate in getting a team into the Sprint Center. Granted, it's an area that's close to the area airport (15 miles) has five Interstate and three US highways going into town, and is 31st in media according to Nielsen ratings system. More over, there's a lot of corporate backing possibilities with it being the home city of not only Sprint, but H&R Block, Applebee's Russell Stover's Candies, and Hallmark-- so it won't be without takers in terms of getting some kind of backing to the team. But...does that mean it'll bring in the people.

Even so, will the people show up for a hockey team in the area?? Sure, the corporations will be there, but is the area hot enough for hockey?? They'll have to deal with the Chiefs during the fall months, but is there a lack of interest in the Royals or college teams for people to clamor to the rink for a game?? That will be the biggest concern, even if there weren't other suitors for relocation. The CHL's Missouri Mavericks, who play in Independence, Missouri-- 13 miles East of downtown KC-- do have a decent amount of heat, as they are 2nd in the CHL in average attendance with 5,406 in a 5,760 venue. However, the ticket prices is drastically less in the CHL than in the NHL, which could be a deterrent to some hockey fans who follow the Mavericks. Then it boils down to is risk worth the reward??

I'm not saying that the Kansas City relocation play is good idea over Winnipeg or Quebec City; but I'm saying it's another alternative if a team doesn't want to move into Canada. They have the building, they could have the backing, but whether the fans will show up is the big unknown and in the end-- could be the deal-breaker should KC be in the fight for relocation. It's just amazing how they have really fallen off the radar in all of this mess.
Posted by ScottyWazz at 11:40 AM