The John Druce Award: After One Round 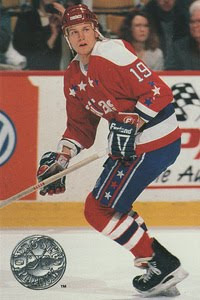 So, one round has come and gone; thus we have to recap the first round of who's the "John Druce" of their team. Of course, John Druce known for picking up the slack for the injured Dino Ciccarelli in the 1990 Playoffs for the Washington Capitals putting up 14 goals and 17 points out of nowhere. Obviously, goals will count for more-- but it's really about the top point getter that you'd never expect.

1. Ryane Clowe, San Jose-- 4g, 3a: Sure, you could say Clowe's performance this season with 20+ goals wouldn't make him a shock, but since he's leading the Sharks in goals and points after one round over Joe Thornton and Patrick Marleau is a bit of an upset special for the team.
2. Chris Kelly, Boston-- 3g, 3a: For a guy who had two goals in five points in 24 regular season games, Kelly has come through pretty big for the Bruins in the second season. Tied with Nathan Horton in goals and second in points; the impact from Kelly's trade is coming through when it's been most needed.

3. Mike Fisher, Nashville-- 3g, 3a: While his points total will probably go down in a more checking role against the Canucks top line, his contribution in the Ducks series has been pretty solid and shows what he could actually provide, outside of the defensive side of his game.

4. Alexandre Burrows, Vancouver-- 3g, 3a : With the top line being shut down, Burrows came up pretty big for the Canucks. His clutch goal in Game Seven solidified him as a top provider and I'm sure there will be more to come of that, as the first line will be targeted for shutdown against the Predators.