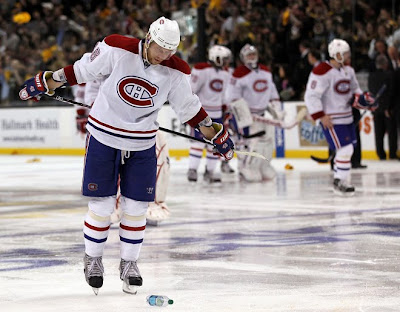 For the team who was the miracle of last year's playoffs, they couldn't get it done this year. It was a different goalie, but one who played as good, if not better, than the one last year, but they ran into their arch-rivals and couldn't seem to solve their Vezina nominated goalie. Now, what is there to do with the Montreal Canadiens.

Starting in net, which was the big story in the off-season, Carey Price did seem to live up to what the critics set out for him. While playing 72 games and winning 38 of them, Price was able to be 8th in save percentage (of goalies who played 25 or more games) and 10th in GAA (25 or more games). With that kind of workhorse ability and consistent play; the Habs look like geniuses in terms of which goalie was the right one to pick. However, they may want to get their back-up some more playing time, as not to burn out they young netminder. Alex Auld did well in his appearances and could probably be re-signed at a low cost.

The defensive story was that of PK Subban, who had solid rookie-campaign point-wise, though his minus-8 leaves something to be desired. Yet, the bigger issue is that only PK Subban and Jaroslav Spacek are under contract as defensement-- James Wisniewski, Roman Hamrlik, Andrei Markov, and Hal Gill are all UFAs. While Hamrlik will probably be gone and it'll take a big discount for Markov to come back-- Wisniewski will probably be a big focus on getting back into the fold, as he had 30 points and +4 rating in 43 games with the Habs. He brings a lot of intangibles and can log a lot of minutes for the team. Gill could be up in the air because he does bring shot-blocking ability and size....but there's not too much else that makes him overly worth keeping.

As for offense, the Habs came into the playoffs as the lowest scoring team out of the 16 teams that were in the start of the playoffs. They spread out their scoring throughout the depth chart, but at the same time-- didn't have someone who was one to take the reigns. While captain Brian Gionta lead the team, he still had under 30-goals, while they only had three other players with more than 15 goals on the year. Yet, with a lot of RFAs and only six forwards under contract-- who knows what will be done to try and get some secondary or primary scoring when it comes to this team.

They had the big run last season, but just couldn't get it going this year. Even so, the play of certain players, like Price and Subban, could have hushed the harshest of critics; even if it's just for a little while. The Habs will always be under an intense microscope and will never get any relief; but if they can get the right crew assembled-- they'll be able to drown out all the obnoxiousness from the press.
Posted by ScottyWazz at 10:15 PM