The Epicness of the Maryland Flag in Pad Form 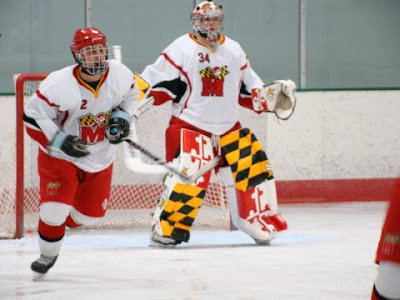 My buddy, Geoff (aka G$) sent me the picture you see above via Twitter and I thought it was the most amazing thing ever. As a Marylander (even though living in Calgary), the flag is a great sense of pride and for the goalie for the Terrapins putting them on his pads?? Just beyond awesome.

So, in doing some research on the University of Maryland Ice Hockey website, I found out that the pads belonged to Matt Mitchell. Thanks to Club President Darren Taillie, I was able to get in touch with Mitchell for a little look at the inspiration of the pads and the season for the Terps.

Scotty Wazz: Matt, you definitely have some interesting sets of pads there, what made you go with the Maryland flag design??

Matt Mitchell: To put it straight forward, I think Maryland has the best flag I have ever seen for any state or country. I missed all of last season injured, so I had a lot of free time on my hands to think about everything hockey (including gear, of course). I was getting ready to order my likely final set of pads for my college career and I just kind of thought, hey, why not go all out on them. Then I just kind of realized that if you turn our flag sideways it split perfectly on a set of pads, and I was set.

SW: What was the reaction from team when you broke them out??

MM: HAHA, it was interesting. A lot of the guys knew they were coming before I had them and loved the idea. When they got there they looked even better than expected, so I didn't get chirped hardly at all by the guys. I remember the first practice I wore them for one of my teammates, Augie Gardner, showed up late and didn't notice them when he got on the ice. The first time he was coming down to shoot on me in a drill he looked up and stopped, mid-drill, and screamed "OH MY GOD!" It was hysterical.

SW: Since it's one of the best flags in North America because of the design, has it been a distraction to your teammates during practice or to the opponents during the game??

MM: You know, I really didn't think anything of the distraction idea when I planned them out. After our first game when we beat Towson I had a couple of guys come up to me afterwords and tell me how confusing it was looking up and seeing the graphics and trying to see the net, so I guess they work.

SW: Moving on from that, you're in your third year with the Terps and the team only has one loss. What is different from this season than last??

MM: A lot of things. As I said, I wasn't around for games last season so I didn't really know what was going on all that much, but it previous years there was a lot of ego in the locker room. A lot of guys were "me me me" and kept fighting in the locker room, it was a mess. This year we have a really close knit group of guys and a great freshman class. Pat St. Clair came in and ended up being an immediate top-line defenseman, and Sean "Diddy" Combs (yes, we call him Diddy) who we thought would be a fourth-line grinder already is nearly double-digits in points. It's just all really clicking for us right now.

SW: Playing in the ACCHL, how are the rivalries with the other ACC team in comparison to other sports, like basketball and football and such??

MM There are definitely a couple of teams that we don't get along with and love beating in our league, yes. We haven't seen Duke yet, but when we host them in College Park next month we are having a big white out game.

But I think our best rivalries actually fall outside of the league. We have already been really chippy with Towson, and Virginia Tech (who left the ACC this year) is another team we really want to beat. I tried to play the Tech game after being in a big car accident (with a concussion, oops) and probably cost us that game, so that's one I'm really looking forward to getting our hands on in Blacksburg later this season.

SW: Moving forward, do you think you guys can keep up this killer pace??

MM: Definitely. There is no reason for us to lose a league game we don't think. Obviously we haven't seen all of the ACCHL yet, but we feel like we're a really strong team this year. Our goal is to win the ACCHL, do some damage at regionals, and hopefully make a run at Nationals this year, so hopefully we can accomplish all of that.

Definitely a solid story for Mitchell and really great to see the pride for state and school in all of this. I couldn't think of a better look for a guy playing with the University of Maryland. Best of luck to Mitchell and the rest of the Terps, so if you're in the Maryland area or the ACC region, go to the website and check them out. FEAR THE TURTLE!!! 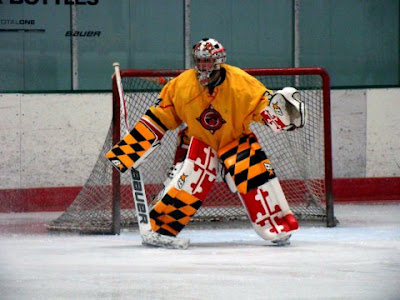 Thanks to Darren Taillie and Matt Mitchell for this, and again-- go to the Terps site and support them.
Posted by ScottyWazz at 10:50 AM

This is, like you said, beyond awesome. Always been a big fan of the Maryland flag design and to see on a set of pads is pretty freakin' awesome. Thanks for putting this up, great work.

Can't really get a good look at it, but any chance the helmet ties in with the heraldry?

Awesome pads, but the flag is being shown backwards.

Well, the blocker is in the right quadrant, and if the goes to double-pad stack on his glove hand-- boom; perfection.

JonnyP said...
This comment has been removed by the author.
6:18 AM

It sure looks correct to me.

Coming from top to bottom, everything is in the right place. Just turn your head to the right 90 degrees.