Mascot Off To A Booming Start 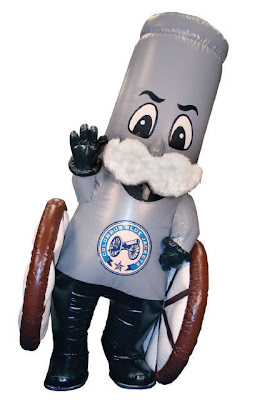 This is Boomer. He is the new Columbus Blue Jackets' mascot, but only when they wear their spiffy new third jerseys. According to CBJ's press release, this is the description of Boomer:

Also during the live unveiling, the team introduced a second, kid-friendly mascot, "Boomer," a cushy cannon character with a friendly face and fluffy moustache. This season, Boomer’s game-night appearances at Nationwide Arena will be reserved specially for those games in which the team wears the Third Jersey. Boomer will make his first start in conjunction with the official on-ice debut of the Third Jersey this Friday.

The jersey itself is something that I don't like, mostly because of the fact of navy blue being the new black in third jerseys, being overused. Plus, the logo seems to be overused with the logo being surrounded by text; however, I enjoy them keeping with the Civil War theme, so you have to like it, even though it looks a bit plain. It also incorporates the initials on the back neck line of former owner John H. McConnell, as the back neck line is another thing teams are using a lot of.

Yet, the big pull is Boomer....who, let's be honest-- looks very much like a penis. The jokes are just there, only with looking at the thing, the Face Off Hockey Show and Lyle Richardson of Spector's Hockey did 15 minutes of innuendo jokes on the November 24th show and it's been joked about on the Twitter, too. The question is how does this get through the marketing department without someone actually saying, "Hey, this could be a little racy." Not only did it have to get through the Jackets' marketing department, but it had to get through the NHL, too.

The shape itself and and the wheels on the side speak for itself, but the moustache is the real kicker. It's definitely something that will be (cannon) fodder for the short time until the novelty wears off (maybe), but you have to hand it to the Blue Jackets for thinking outside of the box....so to speak. They're going with two crazy mascots: A "bee" who gets mistaken as a fictional blue jacket bug because of the name and a cannon that looks sexual in nature and could have many lewd jokes made about it.
Posted by ScottyWazz at 8:00 PM