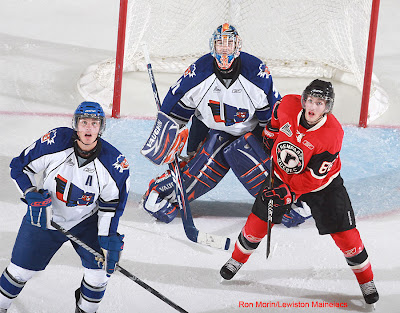 While searching around the interwebs for some kind of story, I stumbled on the picture you see above by Ron Morin, who shoots for the Lewiston MAINEiacs of the QMJHL. I can only assume this is an automated camera, but it made me thought about what are the best shots and where you could get some decent shots of games.

Of course, the overhead is a classic shot, as seen here. You also get a surreal feel when you see shots from the Nassau Coliseum, mostly from the warm-ups, but every now and again during the game you'll get a great shot. Nassau is so great because the lighting allows for a great shadow effect for the pictures and gives a great feel to the shot.

Recently, the shot from the bottom dasher board seems to be a new hit with the kids, as it shows a true ice level shot to the game and all. The fish-eye lens seems to be a trendy shot, as well-- mostly through the corner glass. The first use of fish-eye was in the late-70s where the Capitals and Bruins had this shot from below center ice taken, which could be one of the more interesting shots ever taken.

With the Caps, and sadly I can't find where I read it, but their old barn was great for for photographers to take snapshots for hockey cards due to the darkness. The Capital Centre didn't show the crowd that much, thus it was able to give a better focus on the player.....or something like that. I wish I was able to find that, but I'm lazy.

Another iconic shot is the shots from the goal-cam. There's many shots from there that combine the fish-eye look to it, as well as gets great shots of the goalies who just let up a goal or made an amazing save. It makes the game within the game.

What is the best shot, where are the best shots taken, is there a consensus of it all?? That's for you, the masses, to figure out. Let me hear it in the comments about your favorite type of shot or one picture that stands out to you.
Posted by ScottyWazz at 10:50 AM