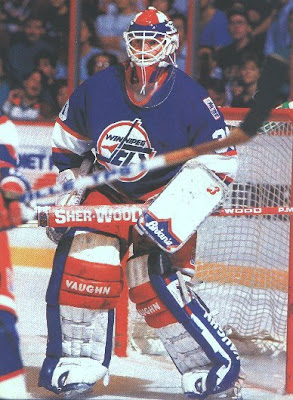 Definitely, this week's AGM completely goes with the equation of the past AGMs where they are solid in their amateur career, but when they got to the show-- they wouldn't live up to the hype. However, this week's AGM has the distinction for being traded for Dominik Hasek, as well as being named for the janitor on the Muppet Show. This week, we look at the career of Stephane Beauregard.

With the buzz around him, the Winnipeg Jets snagged Beauregard in the second round of the 1988 Draft; which allowed him to make the jump to the AHL with the Moncton Hawks in the 1988-89 season. Beauregard would start off with Moncton, playing in 15 games, going 4-8-2 before being sent down to the IHL's Fort Wayne Komets, where he would play another 16 games, going 9-5-0. He would play in the 1989 Playoffs, going 4-4 in nine games with the Komets. Beauregard would start the 1989-90 season back with Fort Wayne, playing in 33 games and going 20-8-3 before he would receive the call up to Winnipeg. With the Jets, he would get 19 games in behind another AGM, Bob Essensa, going 7-8-3 and would go 1-3 in the playoffs for the Jets. At the start of the 1990-91 season, Beauregard would be in Winnipeg behind Essensa-- but after 16 games and a 3-10-1 record, he would be sent down to Moncton for nine games (3-4-1), then ultimately heading back to Fort Wayne. In Fort Wayne, he would go 14-13-2 in 32 games and lead the Komets to the Turner Cup Finals with a 10-9 record, but would lose in the Finals to the Peoria Rivermen. With the 1991-92 season, Beauregard would deal with not only injuries, but the carousel of goalies of Essensa and another AGM, Rick Tabaracci. Even so, Beauregard got 26 games in with a 6-8-6 record for the year.

So, Beauregard was with the Flyers, playing behind two other AGMs-- Dominic Roussel and Tommy Soderstrom, but would be send down to Hershey mid-season to play with the AHL's Bears. In Philly, Beauregard would play 16 games, going 3-9-0, while the story in Hershey wasn't much better; as he would go 5-5-3 in 13 games there.

The summer of 1993 was a little more tame, as Beauregard was traded from Philadelphia back to Winnipeg for future consideration. However, he would only spend 13 games, mostly in a replacement role, in Winnipeg-- going 0-4-1. The bulk of the 1993-94 season had Beauregard in Moncton of the AHL, playing 37 games with an 18-11-6 record. Beauregard would help the Moncton Hawks get to the Calder Cup finals with a 12-9 record, but lost in the Finals to the Portland Pirates. Beauregard would play for the Springfield Indians for the 1994-95 season, playing 24 games with a 10-11-3 record in the season.

Starting in the 1995-96 season, Beauregard would play in the IHL, first with the San Francisco Spiders, playing 69 games for the team and going 36-24-8 on the year, allowing him to take home IHL First-Team Honors, as well as the IHL MVP award for the season. The Spiders disbanded after that season, which led Beauregard back to Quebec with the Rafales in the 1996-97 season. While in Quebec, Beauregard played 67 games with a 35-20-11 record. Beauregard sat out most of the 1997-98 season, but would pick up with the Chicago Wolves to fill in for yet another AGM, Wendell Young, and would play 18 games with a 10-6-0 record and then a 10-4 record in the playoffs, as the Wolves would win the Turner Cup championship.

Beauregard would set out for a European adventure in the 1998-99 season with Switzerland's HC Davos, where he would play 45 games in the regular season-- sadly there's no record online of it all. Beauregard would then move to Germany to play with Schwenninger Wild Wings, playing 58 games with four shutouts, before call it a career after the 1999-2000 season.

While he got lost in the shuffle during the NHL part of his career, he did seem to find a niche while playing in the IHL, where he had most of his success. But, like I said, he did follow the formula of past AGMs and did unintentionally cross paths with other AGMs in the process.
Posted by ScottyWazz at 8:15 AM