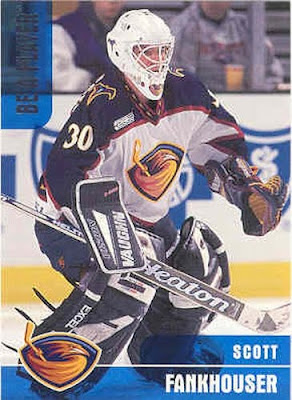 It push comes to shove, you go to the audience and one of the names that came up was this week's inductee. If nothing else, this guy bounced from continent to continent in order to find a gig and was in some kind of demand for him to keep getting work, so he's got that. This week, we'll look at the career of Scott Fankhouser.

There wasn't a lot of buzz when it came to Fankhouser, who was drafted right out of high school in the 11th round of the 1994 Draft by the St. Louis Blues, but he was recruited but UMass-Lowell to play the 1994-95 season. However, after going 4-4-1 in 11 games with UMass-Lowell; Fankhouser went back to Junior A with the Melfort Mustangs of the SJHL for the 1995-96 season. The step-down proved to help Fankhouser, who went 31-9-4 in his 45 games, as well as getting First Team All-Star and Playoff MVP, as the Mustangs won the SJHL, the Anavet Cup for Western Junior A Champ, but would lose in the Royal Bank Cup for Junior A overall champion. Fankhouser would go back to UMass-Lowell for 1996-97, but would play just 11 game again, going 2-4-1 in those appearances. The playing time would go up to 16 games for the 1997-98 season, but Fankhouser wouldn't fair better; going 4-7-2 in those games. The starting role would fall to Fankhouser in his senior season in 1998-99, but he would go 9-12-0 in 32 appearances.

The Blues failed to sign Fankhouser out of college, so he decided to sign with the newly formed Atlanta Thrashers for the 1999-2000 season and would get his start with the Greenville Grrrowl of the ECHL, playing in seven games, going 6-1-0. The record would allow him to get called up to the IHL's Orlando Solar Bears where he would go 2-2-1 in six games, before he would get the call-up to Atlanta mid-season. It wouldn't be great in Atlanta, as Fankhouser would go 2-11-2 in 16 games with the Thrashers. The year would be complete as Fankhouser played one game, a loss, with the AHL's Louisville Panthers. The 2000-01 season would have Fankhouser spend most of the year in Orlando, where he would play 28 games and go 13-12-3, sharing the James Norris Trophy for fewest goals-against with Norm Maracle; but would receive a call-up for seven games to Atlanta and would have a 2-1-0 record in the tenure there. Fankhouser bounced around the leagues in 2001-02, with him starting out with the Chicago Wolves of the AHL, going 1-0-1 before he was sent down to Greenville for three games with a 1-2-0 record. The Thrashers would loan out Fankhouser to the Hershey Bears, as there wasn't a spot for him in their organization. With the Bears, Fankhouser would go 5-2-1 in eight games, but wouldn't have a decision in three appearances in the playoffs for the Bears.

Fankhouser would go to German for the 2003-04 season, playing with SC Bietigheim-Bissingen for 34 games before returning to North America in the 2004-05 season to play for the ECHL's Toledo Storm. In 51 games with the Storm, Fankhouser would go 29-15-4, but 1-3 in four playoff games. Also in '04-'05, Fankhouser would play with the Chicago Wolves for two games, but would lose both games.

Fankhouser would go over to Austria starting in the 2005-06 season with Graz EC playing in 47, but would move over to play for the Vienna Capitals in the 2006-07 season, getting in 54 games for the Caps. For the 2007-08 season, Fankhouser would move over to England to play in 50 games with the Manchester Phoenix. One last kick in the can in North America for Fankhouser came with the Bloomington PrairieThunder of the new-IHL, where he would play 24 games with a 8-15-0 record before he would deciding the call it a career after an injury.

It seemed that Fankhouser lived by the credo of "have job, will travel" as shown from his globetrotting to play. It didn't seem like he could ever get any kind of rhythm going in his play, which showed in his record. Determined to the end, at least he could always find someone to want him to play for their squad. Now, he's passing his experiences on in the coaching realm.
Posted by ScottyWazz at 8:15 AM