Playing "What If" With "Slap Shot" 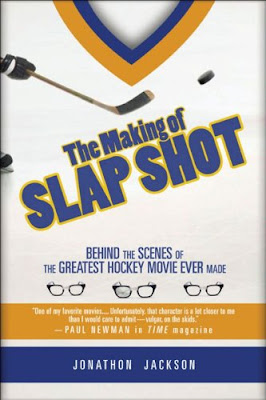 I've been in the midst of reading the book "The Making of Slap Shot" by Jonathon Jackson and even four chapters in, there's a lot of interesting ins and outs that maybe some of the die-hard fans of the cult film didn't know about. You have to wonder what would have happened in each case.

For example, the original title that Nancy Dowd had for it was "Hat Trick." While it does stick with the hockey terminology, the fact of the matter is that it seems a little too "Disney" if you will. With the script as gritty as it is, the fact remains that it would have been stuck with "Hat Trick," it may have not gotten the appeal it does today. Slapshot fits the element of the film and the script.

However, the most interesting thing was the casting of Reg Dunlop. Apparently, Al Pacino was the first to jump to the part. It obviously raises the question of how the movie would have been with Pacino rather than Paul Newman. Many people can't even fathom the hockey film without Newman, much less someone like Pacino taking the role-- someone who could be an opposite in demeanor in terms of acting. But how would the role have been different?? Would Pacino been a little too fierce for the role, would he have overshadowed the role that the Hanson Brothers had, would he have changed the script (something that I believe was talked about in the book)?? Also, Jack Nicholson was talked about, too before the casting of Newman.

But the thing I liked about the book is the build-up it takes in order to get to the actual making of the movie. It's not so much a behind the scene retrospective of the movie, but it has all the research of the movie that Dowd put into it in following the Johnstown Jets and chronicling the whole thing to put into the movie. While I didn't think I'd be all that interesting in the build-up, I don't know if I could do without it in hindsight. Especially the other guys thought of to play Dunlop other than Newman.

Like I said, I'm not even a quarter of a way through it and I can't wait to continue on with it. Jackson did his work and really, as Dickie Dunn would say, captured the spirit of the thing. I can only hope that as they get into the whole making of the movie, the anticipation continues on-- which I'm sure it will.
Posted by ScottyWazz at 11:00 AM