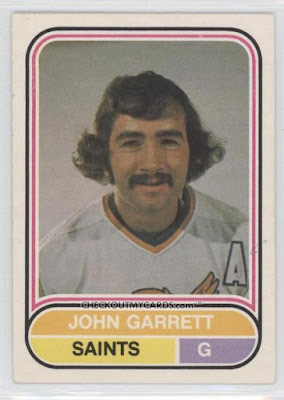 With the "Mo-vember" celebration almost at an end, I figured I go with a guy who is known for his moustache during the hey-day in the 70's and in even now as we see him appear on TV for broadcasts. In the end, his aura of being a quick-witted, light spirited fella allowed him to be a friend in the media and then dive right into that fraternity afterwords. This week, we'll look at the career of John Garrett.

The first exposure of Garrett is when he started in the OHA with the Peterborough Petes, which was headed by Roger Nielson starting in the 1969-70 season. Between that season and the next, Garrett played 99 games with the Petes and would be loaned out to the Montreal Jr. Canadiens for the 1970 Memorial Cup, which he would go 7-1 in nine games played on way to helping Montreal to a Memorial Cup championship.

Garrett was picked in the third round of the 1971 Draft by the St. Louis Blues and would spent the 1971-72 season with the Kansas City Blues of the Central League. Garrett would get most of the time in net with 35 games over the season, but sported a mediorce 13-14-7 record in the process. For the 1972-73 season, Garrett would go over to the Western League with the Portland Buckaroos for 17 games (6-8-2) before he would be moved to the AHL and play 35 games with the Richmond Robins, as well as three playoff games-- all losses.

Not seeing much of a chance of getting to the NHL in the 1973-74 season, Garrett tried his luck with the WHA after getting picked up by the Minnesota Fighting Saints. Garrett would split time with Mike Curran in the year, playing 40 games with a 21-18-0 record as well as going 4-2 in seven playoff games. Remaining Minnesota for the 1974-75 season, Garrett would get increased time, with 58 games under his belt and a 30-23-2 record on the season and 6-6 in the post-season, losing out in the semi-finals. In the 1975-76 season, Garrett would play 58 games with the Saints, going 26-22-4 before the Saints folded mid-season.

To finish out the 1975-76 season, Garrett signed with the Toronto Toros, where he would go 3-6-0 in his nine games there. The Toros would move to Birmingham, Alabama and become the Bulls for the 1976-77 season, which saw Garrett play 65 games and go 24-34-4. Garrett would have the most losses by a goalie that year and give up the most goals at 224, even though he led the league in shutouts with four. It wouldn't get much better in the 1977-78 season, with Garrett playing 58 games, going 24-31-1, which was the most losses again and gave up 210 goals-- another league high. The Bulls would only be in the first round of the playoffs, losing in five games with Garrett playing all five games (1-4).

Garrett was traded from Birmingham to the New England Whalers, and although he was claimed by the Chicago Cougars in the expansion draft, the Whalers got him back as a priority selection before the 1978-79 season. Garrett would play 41 games with the Whalers that season, going 20-17-4 and then 4-3 in eight playoff games, losing in the semi-finals.

Garrett was traded from Hartford to the Quebec Nordiques for Michel Plasse and a fourth-round pick in the Draft. Garrett would play 12 games behind Dan Bouchard, with a 4-5-3 record. He would also get five games in the playoffs, going 3-2. Garrett would stay with Quebec for the 1982-83 season, playing 17 games with 6-8-2 record before he was on the move again.

Garrett was traded from Quebec to the Vancouver Canucks for Anders Eldebrink, as Garrett would play 17 games in the 1982-83 season and go 7-6-3 and play one playoff game, which was a win.

However, that 1982-83 season had an interesting twist, as Garrett played in the 1983 All-Star Game to replace the Canucks only representative, Richard Brodeur-- who was injured. Garrett played lights-out and was about to be named the MVP of the game. However, Wayne Gretzky scored four time in the last 10 minutes of the game, which caused a re-vote and Gretzky taking over the MVP honors.

The 1983-84 season had Garrett playing behind Brodeur, getting in 29 games and going 14-10-2 for the season, though he would get only relief duty in the playoffs. Garrett would start out with Vancouver in the 1984-85 season, playing only ten games and going 1-5-0.

Garrett was then sent to the AHL's Fredericton Express for the 1985-86 season, though he would only play three games (2-1-0) before hanging up the pads. He wasn't out for long, as Garrett was named the assistant GM of the Canucks for the remainder of the season; but would get out of the management game after that.

After hockey, Garrett went into broadcasting; first with CBC's Hockey Night In Canada from 1986 until 1998 and then onto Rogers Sportsnet, color commentating on the Calgary Flames and Vancouver Canucks, which is where he stays to this day.

A guy who was always good for a quote and put in interesting situations, but would always step up to the table. One story is that when the Canucks had injury issues, a player chimed in that Garrett (oddly nicknamed Cheech, for....I can only imagine) could fill-in for the deplete Canucks front line, though it never came to be. While many people are hot-and-cold to Garrett commentary (mostly cold), but he's been through a lot of aspect of the hockey lexicon and has a lot of stories to tell....even if people don't want to hear it.
Posted by ScottyWazz at 8:15 AM