Axing Gordon From His Fishermen 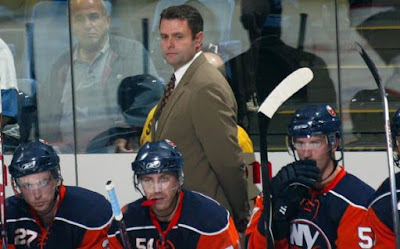 But seriously, the New York Islanders made the first move in the coaching shuffle by firing Scott Gordon. Granted, it's more of a "relief of duties" as Gordon will be an adviser to GM Garth Snow, which means he's just behind Kevin "E" Connolly in that department. Jack Capuano was named interim coach, but Snow wouldn't commit to Capuano for the long-term.

Many fans of the Islanders are question why they are still fans of the team. In fact, Satellite Radio's Gregg "Opie" Hughes of the amazing "Opie and Anthony" radio show pinned most of the blame on the goaltending tandem of Dwayne Roloson and Rick DiPietro: 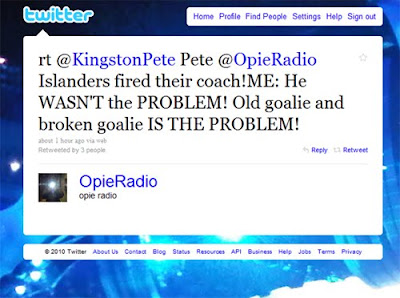 And Mr. Hughes has a point, that both Roloson and DiPietro aren't the most desirable tandem, maybe they should have had the three-headed-monster with re-signing Marty Biron-- not like they didn't have the cap space, that's for sure. To Roloson's defense, he is 17th in save percentage, mostly due to be barraged with shots.

The team itself has a lot of decent young talent, but normally, you don't have them on the ice at the same time. Usually, you have some decent veteran presence along to teach these guys. Sure, Doug Weight is a nice veteran, but you want to have someone to be able to play alongside of them and not just be the player/coach kind of role. You can have all the great young talent in the world, but you don't have someone there to aid them, it's not going to work out in the short-term.

Of course, injuries play their part, as Mark Streit and Kyle Okposo got injured in the pre-season and that may have helped a little bit, but don't know if it would have been able to completely reverse the woes that the Islanders have had.

Even with all these things, how much does the franchise expect out of Gordon or any coach for that matter?? It's kind of hard to expect the world out of this team when there's so much room for improvement. Even Islanders great Al Arbour may have an issue coaching this team and trying to get them back on the winning track. When you have James Wisniewski as your top scorer....it's a little hard to swallow. Luckily, the goal-scorers are still John Tavares and Matt Moulson, who have six apiece, but it doesn't help the rest of the team has 25 more in 17 games. Only the Maple Leafs and Devils have less goals for than the Islanders so far.

Granted, Long Island isn't the most sought after place to be-- not just because of the arena, but they are in a rough division and are already at a disadvantage; thus going into a bad situation probably won't attract the free agents. Maybe during the 1980s years, sure-- but now, it's like a death sentence. But what can you say about it all, Charles Wang thinks he has everything going the way he wants to and for a second, he did when the Isles squeaked into the playoffs a few seasons back. However, since then-- it's been downhill and rumors are about as to what's next for the franchise in Uniondale.

Larry Brooks has suggested that the team move to Queens, while many say that teaming up with the New Jersey Nets and be like Colin Quinn and go to Brooklyn. Many have thought that the Kansas City option could be there if push came to shove. This is all depended upon what happens with the new arena possibility on Long Island, of course, and the Isles have some years left on their lease at Nassau Coliseum; so we can't put the cart in front of the horse.

The end game now is whether or not Capuano can turn the ship around. If he can't-- what's the next step?? Do they actually make moves that'll benefit the team or do they stay with the status quo and hope that they can have a revolving door of coaches and maybe one will stick. Have to wonder if Ted Nolan could have better with this team if he stayed around.

Now, it's just a wait and see game. It's now up to the players to respond or risk their own gigs in the organization. If they can actually do better-- then it was the right decision. If they stay the same; well....expect this to be going around for some time now when it comes to the Long Islanders.
Posted by ScottyWazz at 10:40 AM