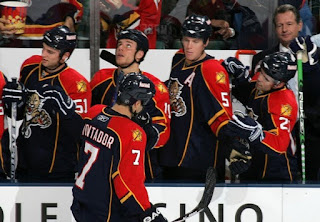 In the December 1st edition of The Hockey News, David J. Neal has a great piece about why the Florida Panthers are struggling. His main points are the slow starts and the lack of getting to the playoffs as the fans have been staying away in Miami in droves.

However, there's one great point that he has in this article which made me wonder why there is a double standard:

"When fans in Calgary or Edmonton or Detroit or Boston or Chicago don't want to pony up the equivalent of six table dances at Chez Paree to sit through hockey with no hope, they've been considered discerning fans or saluted for complaining via their absence. When fans in a warm-weather city don't want to pay big bank for repeatedly lousy results, they're philistines in a bad hockey market."

Neal makes a great point-- why is there this double standard when it comes to any team below the Mason-Dixon line?? From the Predators to the Panthers to the Thrashers and to the Coyotes, whenever teams are in trouble in the south-- the argument is that it's not a hockey market comes up ten-fold. It's not because the team is crappy and people don't want to want to pay for a losing effort; it's because it's only gets down to 50f as a low in January on most nights and that shouldn't happen if you want a hockey team.

In the same publication, The Hockey News talks about the revival of the Blackhawks and how great it is to have them back in the playoff fold again. Because it's an original six team, they get this publicity, but you can bet that if the Panthers next season win the Stanley Cup; no one would bat an eye or do a piece about them going through the tough times and surviving many talks about the team moving from Miami to elsewhere. More than likely, you'd probably get people (who claim to be traditionalist) bitching and complaining how much of a travesty that the Stanley Cup is residing on the beach and not in a place where hockey has been played for generations upon generations.

As we all know though, if you want fans-- you have to be successful and stay successful to keep a high fanbase. If you put a team like the Red Wings or the Canadiens in a place like Miami-- you'd probably get a booming fanbase. Put the ownership group, front office, and roster on the ice in Miami and you'll have people coming out to see the team and it would be considered a successful organization.....regardless of the location. You wouldn't have the arguement that they shouldn't be in the league because it's a warm climate, or at least you'd hope not.

That being said-- the Panthers and the Thrashers are my top two teams of being relocation. The Panthers is due to the attendance and the ownership group being in disarray and the Thrashers has to do with the ownership group as well, who has been having some in-fighting for quite a while, I do believe. Odd how the Southern teams have the awful ownership issues and makes people talk about why they shouldn't be in the league.
Posted by ScottyWazz at 8:38 AM