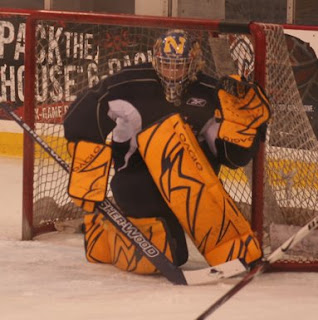 Nice story out of DC, as Washington Capitals Web editor Brett Leonhardt signed an amateur try-out contract with the Capitals and will be suiting up as the back-up for Brent Johnson, only until Simeon Varlamov gets into the area from San Antonio and takes over for Leonhardt.

Now, this shows a couple things. One, it gives hopes to bloggers everywhere that they could be the next to be called upon to suit up for their favorite team. Second, as a former student at Neumann College (only two semesters), it's great to see someone from there make a splash as big as this. It could be only his 15 minutes of fame, but I'm sure for Leonhardt, it'll be a moment that last a lifetime. Thirdly, this could be the first Division III player from the NCAA to suit up for an NHL team. I haven't done the research (there's a shock), so I'm probably wrong-- but still.

With Johnson having a bum hip, you never know what could happen with Leonhardt or even if the Caps will let the young stopper be in the game for a little bit to face a shot, then go on his merry way and have that memory to pass onto his grandkids. Either way, I am quite jealous of Leonhardt and hope that he savors every moment of it.
Posted by ScottyWazz at 4:50 PM