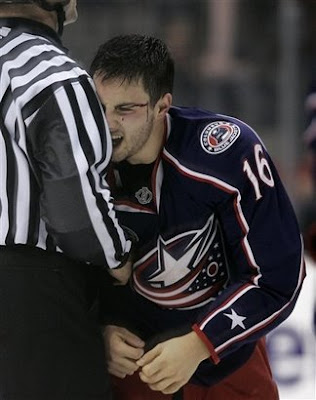 A big blow was dealt to the Columbus Blue Jackets and truly opened up the Calder Trophy race, as Derick Brassard dislocated his right shoulder and is to have surgery which will keep him out for the rest of the season. Brassard was huge for the Jackets and truly shown through as a top-line center, but because of a scuffle-- his shoulder has been injured again and he's out for the season.

First off, you have to wonder about Brassard's durability. This is his second serious shoulder injuries for Brassard, which has wreck his big chances to shine on the big club. Brassard could be considered a liability now and the Jackets could wonder if he can sustain a full year without getting injured. Though, you look at his teammate, Rick Nash, another young guy who was hampered with injuries in his early years and he's now the franchise guy for the Jackets. Maybe lightning can strike twice, and I'm sure the Jackets' brass is hoping the same thing.

Secondly, the Jackets don't have much for scoring talent down the middle. With the loss of Brassard; that eliminated the only scoring talent at center for the Jackets. The Jackets have been looking for a center for the longest time and thought they could have it in Brassard, yet now here we are-- no contingency plan in place. So, on top of a right-handed shooting defenseman, they still need to search for that elusive center.

Third, you have to say with Brassard out-- this opens the door for Steve Mason to shine, not only on the Jackets, but for the Calder Trophy race. Also, for guys like Kris Veersteg, Patrik Berglund, and Blake Wheeler-- it's a huge chance for them to step up and keep on shining through and step up in order to not only make a name for themselves, but they will be a big part of their respective teams' success down the line. While Brassard wasn't the runaway favorite; he was a big favorite after his performance for the first quarter of the season.

It only creates more drama, not only for the Calder race, but for the Jackets' search for a #1 center on a team that needs it.
Posted by ScottyWazz at 10:29 AM