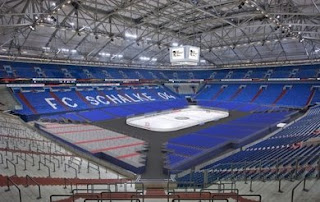 Forget the Winter Classic, forget the Ice Wars of 2001-- the IIHF and the German Ice Hockey Association is looking to go big for the opening of the 2010 World Hockey Championships. The Germans are going to make an announcement that the opening of the 2010 WHC will take place in Veltins-Arena, home of FC Schalke 04 in the Budaliga. The hope is that the Germans will quall the capacity 75,976; which would overtake the world record of Michigan/Michigan State game in 2001 that had an attendance of 74,554.

There's high hopes for the German Organization Committee is hoping for as many as 500,000 spectators for the 56 games with 1,000 journalist covering the event, and 800 million viewers worldwide to take in the event.

Now aside from the opener, the other arenas that will hold the event will be the SAP Arena in Mannheim and the Lanxess Arena in Cologne. The IIHF gave pass to the Veltins-Arena since all the WHC games have to be played in an enclosed arena, and luckily for the Germans, the Veltins-Arena has a closeable dome-- hizzah.

Now, with the Germans going big by huge, wil the NHL or another league (probably NCAA) decide to go really big. Luckily for the NHL, they have access the the biggest stadiums out there in some hockey towns. Granted-- this is a little bit of a branch off of my "What If" fantasy outdoor match-ups, but they could be plausible.

-Beaver Stadium; State College, Pennsylvania (107,282): This would be a perfect opportunity for the Battle of Pennsylvania on the big stage. The seating capacity is plentiful and what better way to spend a day in "Happy Valley" than seeing the Flyers and Penguins beat the crap out of each other??

-Michigan Stadium; Ann Arbor, Michigan (106,201): Sure, this has been done before with a big game in Michigan, but why not put the Red Wings in one of these events?? Oh, wait-- they're doing that at Wrigley.

-Ohio Stadium; Columbus, Ohio (102,329): Whether it's the Blue Jackets or The Ohio State University Buckeyes, there could be a solid turn out. It has the weather, the lake effect snow possibility, and big game atmosphere appeal to create a big draw.

-Los Angeles Memorial Coliseum; Los Angeles, California (93,607): It's a weather issue, but there's a chance to have a big TV market put out there and display another one of the talented young teams out there in the LA Kings.

-Cotton Bowl; Dallas, Texas (92,200): Sure, it's a reach; but if there's something the Stars could pull-off-- this could be the thing. It's a huge venue with plenty of history behind it-- but weather would be the huge factor in all of this....and we know it won't cooperate.

-FedEx Field; Landover, Maryland (91,704): The Alex Ovechkin factor would be in full effect for this one, but the only issue is the wacky mid-Atlantic weather at any time of the year that could queer the deal. Yet, if the NHL can make it happen-- they will find a way. I'm sure there's some spare parts from the old Capital Centre still laying around across the road there.

One can only dream, and of course the biggest stadiums are in the South or West; which creates the problem of weather-- but still. If the NHL would want to do something bigger than the International games; they'd find a way to do it and make it a huge event. We'll just have to wait and see.
Posted by ScottyWazz at 9:22 AM

Scotty, FYI...Schalke04 play in the Bundesliga.
I added you to my blogroll by the way...
http://arussell84.livejournal.com

yeah...livejournal because I am so cool