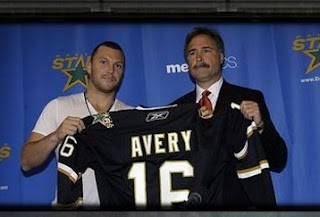 First, Let me preface this by saying that as an agitator on the ice, I believe Sean Avery is one of the best out there right now. He has all the tools to be a great player and decent scorer, but yet his mouth is what gets him the attention in the world and not his play on the ice.

Now, onto the comments that got him suspended indefinitely. My thing with what he said is that he needs to keep the personal life out of all of this, especially when he wasn't questioned about the whole thing. It seems that he really has a big bout of jealousy in regards to his ex-girl Elisha Cuthbert, especially since she has been linked to Calgary Flames' defenseman Dion Phaneuf. It wasn't enough people were prepping for the Avery-Jarome Iginla confrontation after Avery called Iginla "boring", then we had this whole thing with Phaneuf brewing.

However, kudos to the NHL for suspending him. Granted, the indefinite side of things is crap, but I think it was only due to the fact that they couldn't have reviewed it and given a solid number in the time they were given. Avery's commentary is not what the NHL needs, and while some would argue that this is Gary Bettman's way of shutting down someone who could draw attention to the league.....but it's not the right attention they would want. Fans are upset that the NHL stopped a possible huge beating of the NHL's most hated player, but that would be more negative attention the league would get and not need.

It's a very telling sign when many of Avery's teammates are SUPPORTING the NHL's decision. They don't seem to like him very much and what happens during the first game he was out?? They go out and win 3-1. Could Avery be the thing that was breaking apart the Stars?? If they go on a huge winning streak with Avery out-- will he be the blame for the early season disaster?? With three years left on his contract at $4M left on each year, it'll be hard to buy him out, but if they get better-- they may have to spend the money to do that.

We'll have to wait and see what the future holds for Avery, but who knows what could have been done had he kept his mouth shut and let his game do the talking for him.
Posted by ScottyWazz at 8:44 AM

I think a team suspension would have been a bit more appropriate than a league suspension.

Just seeing the Stars players interviewed about it, you could tell they were embarrassed.