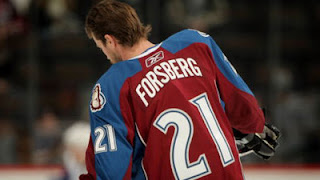 Note to Peter Forsberg-- no. Just stop it. It's not worth it, it's not practical, and in the end-- it'll probably do more bad than good.

In case you didn't hear-- Peter Forsberg is looking to make a return to the ice in the playoffs, preferably with the Colorado Avalanche. Of course, this is assuming the Avalanche make the playoffs and Forsberg's foot can actually hold up to any kind of skating ability whatsoever. Forsberg has been getting therapy for his foot with electrodes and wore them in his skates last season when he returned to the Avs. However, from that time, there have been more procedures to his right foot, which could cause some concern for his return.

Here's the thing though, and this is just me, but I think this could be an awful idea for all involved. First, for the Avs-- there's no need for a distraction when they are trying to scratch and claw to the playoffs as it is; no need to blow a roster spot when you need all the healthy bodies you need. For Forsberg, he's just tainting his legacy every attempt at a comeback he tries. You would think with the history and accolades he has achieved, he'd just call it a day and go enjoy his retirement in a front office position and not try to ruin his foot to the point where he'd have to need a walking aide in order to go on with his life.

Plus, with all the rumors of Forsberg coming back last year, we don't need to be inandated with all these reports, especially after the Summer/Autumn/Winter of Sundin we've had. Why are the Swedes always the ones with rumors surrounding them?? Whether it's Forsberg, Sundin, or Fabian Brunnstrom-- they always have heavy rumors around them. Craziness.

So, for the sanity of everyone in the hockey world; Peter, Foppa-- please, don't do the "will he/won't he" stuff with us. We were tired of it many times before and we're going to keep getting tired of it every time you try to come back. Just finally end it and go into the sunset with what's left of your memories and pride.
Posted by ScottyWazz at 7:46 AM