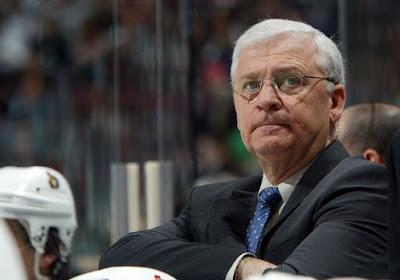 With the holiday season going on and not too much news going on-- it's time to see if I can get something to click....which will either be forgotten about or fail miserably. It's the journey that's always fun, though the result is one that may not be the one desired.

Basically, from time to time; I'll do the Armchair GM bit to see what I would have done in different situations or what I could be hoping for in terms of what's ahead. It's looking more and more like the latter will come from it, but let's do it anyway.

So, the Ottawa Senators are going through horror right now. It really stinks, because they're one of my favorite teams, though they are reverting back to when Norm Maciver, Jamie Baker, and Sylvain Turgeon were the top line. In fact, many would argue that the Pizza Line is acting that way right now with their lack of production together. The defense that once was one of the stingiest in the league is now looking like Swiss cheese. The only saving grace has been Filip Kuba and the goaltending, which, if you have followed the Sens and their goalie situation.....yeah, not good.

What can you do now if you're the Senators?? You have to wonder if you need to trade someone and shake up some things. Maybe get rid of some defensemen and bring up youngsters like Brian Lee and extended stay in Canada's capital. See what you could possible get for guys like Antoine Vermette, Mike Fisher, or Chris Kelly to get some early rebuiling. Worst case scenario, see if Jason Spezza wants out or shop him around. Odds are they'll get Milbury'd in the deal, but it could be a light under the fire of everyone and show that no one is safe and they need to produce to stay on the team.

For a team with plenty of promise and so much potential, it's just hard to see where it all went wrong. Sure, the lack of secondary scoring is very prominent, but with the potential of guys like Vermette and Kelly-- you'd expect something more than the effort that has been put forth. Though, with all the money put to the big three, it would be hard to get another top-six forward for the price of peanuts.

If the Senators want to be the team pundits thought they could be, something needs to be done now before it's too late for them. If not for the present, definitely for the future. There's only so many coaches that the team can go through before it's the player's fault due to lack of chemistry. At that point, you have to blow it up for the sake of the success.
Posted by ScottyWazz at 8:58 AM