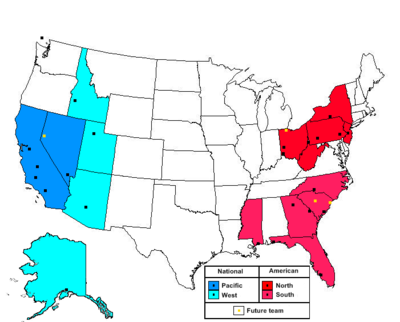 The Fresno Falcons of the ECHL announced yesterday that the team had ceased operations for the season and had their membership terminated. This is the second ECHL team in a month to cease operations, as the Augusta Lynx left the league on December 2nd.

You have wonder how many teams will have the same fate for the rest of the year and during the off-season. While the ECHL is the "premier AA hockey league", according to their website, they also have the most travel of all the minor leagues. With teams spread from Alaska to Florida, as well as taking into account the craptasticness the economy has become, it may be time for the ECHL to split for the survival of the teams still around and wallets of the ownership groups.

The current ECHL came when the WCHL and ECHL merged into one big conglomerated minor league. Hindsight being as it is, it looks like it could have been the dumbest idea they could have had at the time. The pure logistics of the entire thing, especially when you have a team in a remote place like Alaska, seemed flawed from the start. As it stands, the ECHL has nine teams West of the Mississippi and 11 teams East of it. The Toledo Walleyes will start next season upping that total to 12, while the Columbia Inferno, a yet unnamed club in Myrtle Beach, South Carolina, and another unnamed club in Reno, Nevada awaits completion of new arenas-- which would bring the total to 14 teams East and 10 West.

Why not split it up again?? Make it like MLB where the two leagues play a regular season then the best from each side play for the Kelly Cup. It seems like a more logical and cost cutting measure to ensure that you don't have teams dropping out mid-season like it seems to be going on right now. Not only does it cause havoc for fans of the teams who drop out, but the schedule makers and more over the players-- who have their playing future in the hands of other GMs who may or may not need them on their team. It's a major blow to players who may be on the fringe as it is right now, their last game could have been their last game ever.

But, I'll touch back on the fans-- how do fans go about the demise of their team mid-season?? Especially in the Falcons case, as well as the case of the Columbus Stars in the UHL back in 2003-04 season, where the team was in first place in their division before folding up shop. With high hopes for the rest of the season, to have the carpet pulled out from underneath them like that is probably like a permanent kick to the groin. Especially not knowing if this is just until the owners recoop the losses (somewhat unlikely) or if this is until a new ownership can come in and either resurrect the team or get an expansion franchise.

It's tough to support your local hockey team when the money to do so may not be there, but if you have the chance, you definitely should. You never know when they could be take away from the area like they have been in Augusta and Fresno.
Posted by ScottyWazz at 9:08 AM

ECHL teams only play within their own conference unless they request it to the schedule-maker, which basically makes your whole idea a moot point. In fact, this year teams play out of their division in the playoffs instead of the conference, and playoffs are a 2-3-2 format. Nothing you're suggesting is not already in place.

NO, the point isn't mute. The ECHL with a team in Alaska is as dumb as anything can be. More teams are dropping out. Why?. Charlotte said going to the AHL was primarily to save on travel costs. (Go figure, better league. Less money). The last remaining original member, the Infamous Johnstown Chiefs, left for the same reason (only to go into a dubious market at best with even less natural rivals). AND, add to the fact, the IHL and the Central Hockey Leagues have merged into a regional SUPER LEAGUE that is officially annoucing it's bid to become the official, not just the claimed "Double-A League of Hockey".
Pat Kelly and Jack Riley, both veterans of the old EHL, which overexpanded in it's day (and that was only to Birmingham) wanted the ECHL to be a "bus league" and until Richard "Dick" Adams took over as commish (he was the one who purchased the failing WCHL instead of letting it die..(California people aren't into minor league hockey "DICK"!) the league profited.
Plus, you had joksters like the Columbia Inferno group that had the City of Columbia pay their light bill until even the most faithful realized these guys didn't know their head from their buttholes about the biz. (especially that ditz they hired to run the office. Talk about less-than-a-fan-girl!).
Anyway, a league I thought was doomed has made it another season with realistic regional expansion at hand. I'm talking about the SPHL (Southern Pro Hockey League).
Augusta, GA is coming into the fold this year with teams in Columbus (GA), Knoxville, Tenn, and Fayetteville, NC. Although admittedly, this is a Single-A quality hockey league, after a couple of beers, the fans in the South won't care as long as it's good clean and AFFORDABLE family fun..(10 to 15 buck ticket range). When the ECHL got to cost 25 to 30 bux a seat, I knew their day was done.

But what do you think would happen when a team in Charleston, SC had to travel to Anchorage Alaska for a game?. Not only ludicroud, it is INSANE..(BTW, look for the Charlestgon Stingrays to go up to the AHL within a season or two)

PappyCaligula said...
This comment has been removed by the author.
12:33 AM