Buffalo On The Block?? 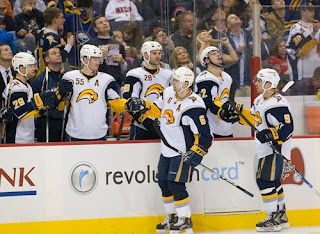 According to unnamed sources, the Buffalo Sabres are quietly on sale. TSN brings up an article from Western New York Hockey magazine that owner Tom Golisano is listening to offers to sell the team from anyone who may be wanting to listen. It also says my favorite wanna-be owner, Jim Balsillie, has been approached by minority owner Larry Quinn. Also in the article, it says that the deal could see a partial schedule of the Sabres playing in Hamilton's Copps Coliseum.

Now, Balsillie approached Golisano last December, but was turned down because Golisano didn't want to sell to someone who wanted to move the team. How the economy changes the tune of many people; regardless of their morals.

Could the Sabres be the most unstable hockey organizations out there?? You look at the team who was bought by Golisano for $20M in 2003 when the Sabres were on the bankruptcy block. They built up their franchise through the draft, made a successful run in the playoffs for a few seasons and now, they seem to be on the verge of becoming the Montreal Expos of the NHL calling two different countries their home.

Though Jim Kelley (a writer very close to the Sabres organization in the past and not the Bills former QB) penned this article-- you may want to wonder why this is coming out all the sudden. I don't think I'd doubt Kelley, what with him being honored numerous times over and being inducted into the Hockey Hall of Fame-- just call it pessimism for the sake of being pessimistic.

It's not as if they are floundering, they're 11th in attendance with 18,562 and at 99.3% capacity. Granted, it's a drop off of their 2nd in attendance last season at 19,950; though it could be a tad skewed thanks to the Winter Classic. It's not as if they are doing horrible, as such. They're currently 9th, two points out of a playoff spot. If not for their recent slide losing eight of their last 11, they could be at the top of the Eastern standings right now. Who knows what the motives are, aside from maybe trying to cut some losses for Golisano, whatever they may be.

Yet, the thought that Mr. Jim Balsillie was approached by the minorty owner about the whole thing may mean that things are looking up for this man to take over an NHL team. The whole Hamilton split schedule thing could be interesting in terms of whether or not the Toronto Maple Leafs will start bitching and moaning about territorial rights and stuff of that ilk; but this is all hearsay and conjecture at this point.

But, whatever is the deal-- should Balsillie actually be in the running, you know Hamilton will probably go from split season to full season in a matter of seasons. Think of what he could do with the team, however, with the wallet open. It may not be like this current ownership who don't seem very willing to pony up to the table with contract renegotiations come about, unless they were pushed to do so (ie: Thomas Vanek). Balsillie could make this team a solid organization if he were to take over, but it wouldn't take much with key guys like Vanek and Ryan Miller locked up for the long term.

The funny thing in all of this is that with all the talk and chatter of the Phoenix Coyotes being in trouble, the name that comes up for being on sale is the Sabres. For a team that seems to be in good standing financially and solid fan base, they're now-- alledgedly-- back on sale for the second time in less than a decade.

UPDATE 12:15 PM ET: Looks like Larry Quinn is putting out the fires quickly by denying the report of Jim Kelley's in WNY magazine.
Posted by ScottyWazz at 8:40 AM