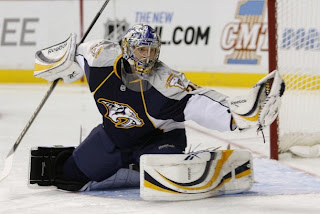 John Kreiser shines the spotlight on Pekka Rinne of the Nashville Predators and talks about how his play has allowed him to usurp Dan Ellis as the Predators starter. Rinne, who has been touted as the future in net for the Preds, has picked his spots and made his way through the system to take over the throne in net.

It got me thinking about Nashville goaltending history. Outside of Tomas Vokoun and maybe Mike Dunham, it's been a varible crapshoot for the Predators when it comes to goaltenders. Just recently, they've gone from Vokoun leaving via a trade as Chris Mason was deemed good enough to take over the role. That didn't happen, but luckily they got Dan Ellis and he was able to take the reigns and go from there. Ellis signed a new deal and his play started to slip which has allowed Rinne to take over.

In fact, the Predators have drafted 15 goalies in their history, with Rinne being the only one to truly develop through the system and be successful in making his hype become reality. Others like Brian Finley and Jan Lasak, both who were highly touted at the time, has numerous set-backs and never flourished into the top-notch goalies they were made out to be. However, why would a team draft so many goalies when you can really only have two rostered. In fact, they have five goalies under contract: Ellis, Rinne, Chet Pickard, Mark Dekanich, and Drew MacIntyre; the latter two being the goalies in Milwaukee of the AHL. Though, maybe Nashville is doing with goalies what Tampa is doing with forwards.

But, for whatever reason, the Preds are stacked in net. In fact, five goalies have been selected by the Preds in the last three NHL Drafts. Sure, two of the three are in Europe and may not make the trip over the Atlantic, but still-- with a youngster like Rinne in the system ready to go, how can you go about picking goalie after goalie in Draft when you don't know what your future franchise keeper would do on the big stage?? I guess err on the side of caution is the main motto for the Preds, and who could blame them since Vokoun left and the instability in net looms. If you throw enough things against the wall, something is bound to stick.

Rinne becomes the first goalie to be developed through the Predators system, which could say something about how they have improved or how shotty their work has been prior to him.

Another thing for the Preds, this could be used as a bargaining chip down the road. Should Rinne or someone else stick and the Preds still have guys developing in the system, they could use the excess goalies to trade away and pick up the spots they need in return. It's something that should definitely be tracked through the next couple of seasons, just to see if Rinne could be the long-term answer or short-term replacement until the next guy comes and steals his spot.
Posted by ScottyWazz at 6:52 PM