Is Hollywood Good For The NHL?? 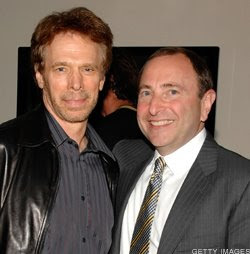 Big time producer Jerry Bruckheimer has been long linked to becoming an owner in the NHL, whether through expansion to a team in Las Vegas or through purchasing an existing team. This link has been strengthened by the Scott Burnside article about the Phoenix Coyotes being in very deep financial trouble-- to the point where the NHL is contacting prospective owners to gauge interest on whether they would want to purchase the team.

However, while Bruckheimer would be a solid financial addition to the NHL ownership cartel, would he be good for the league?? The only reason I bring this up is due to the sideshow that has become the Tampa Bay Lightning after they were sold to another Hollywood producer, Oren Koules. I'm not saying that it would happen with Bruckheimer, but I've become very suspect when it comes to Hollywood actors or big name celebrities playing a big role in an ownership role.

It's not right to judge one from another, but when you have an owner hawking his wears on the equipment of his players and going all out to get a bunch of press for all the wrong reasons, as it turns out, then you're going to have people who would be skeptical about having someone of the same ilk come in and take a franchise over in fear that history could repeat itself. The last thing we need to to have "CSI: Phoenix" come out because of Bruckheimer buying the team or even jumbotron vingettes of David Caruso one-liners when describing the team.

It could be something that's completely different though. Should Bruckheimer buy the Coyotes, he could be a silent partner and just put front the money to the hockey people and be there in name only and not by interaction. Maybe it could be the best for stability to have someone like Bruckheimer's name and money in place in Phoenix to let the fanbase there know that they are serious about fielding a competitive team and making the team competitive in the Phoenix area and nowhere else. That's why someone like Jim Balsillie is probably out of the running for this club.

It'll be a while before we know the fate of the Phoenix Coyotes, though it looks like it could come sooner rather than later. At least, we know that the NHL wants to keep it in Phoenix, regardless of the red-ink that is surrounding the franchise. Interesting, though, that a team named after a predatory animals is the one who is limping by day-by-day.
Posted by ScottyWazz at 3:46 PM