Stability of a Minor League Team 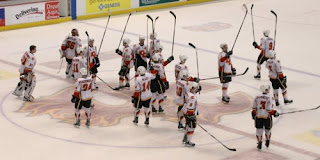 Reports out of Vancouver are suggesting that the Calgary Flames are close to moving their AHL affiliate from Moline, Illinois to Abbotsford, BC. For the Flames AHL team, this could become the third move in five seasons. First, the team was reincarnated in 2005 in Omaha, Nebraska, but then relocated to Moline. Now, with the rumors of the trip to Abbotsford, it could show the instability in the region that the Flames pick for their AHL home.

It seems to be common place as there are affiliation bounces everywhere. Here's a list of affiliations and length of their affiliation with their parent squad. You'll obviously have to click to enlarge, unless you have great vision, then more power to ya. 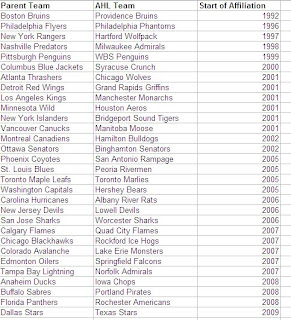 As you can see, in the past three seasons, 15 affiliations have swapped; 16 if you include the new Dallas Stars affiliate that will start next season.

Oddly enough, The Hockey News had an article up about Johnny Boychuk's movement from place to place, not only due to affiliation change, but also due to a team having multiple affilates and filtering through those systems. Since Boychuk's '04-'05 pro debut, he has played on five AHL team, four of those that were under the Colorado Avalanche banner; Hershey, Lowell, Albany, and Lake Erie. Hopefully, Boychuk didn't sign onto any long-term apartment leases.

Though many of the teams stay in the same place, but have new affiliations, it could be hell on fans who have to buy new jerseys every year as they change like the tide. It's almost like fans can't even get attached to their favorite players because you never know when their team could up and move to another more profitable market. However, with the turnover rate, odds are they'll get a team in no time since that seems to be the status quo unless a new market pops up; much like in this case of the Flames.

That said, with the amount of minor league teams and the popularity of the Quad City market; I'd say fans wouldn't have to wait too long in Moline to get another team and cheer them on....only to wonder in the back of their head when this team could move for a better deal to be had.
Posted by ScottyWazz at 7:30 PM