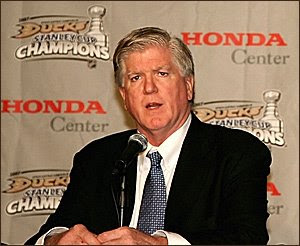 On Saturday, the Toronto Maple Leafs will announce Brian Burke as their new GM and president. Finally.

That's right, all the speculation has come to fruition and I have to say.....how anti-climatic. I mean, you would think to build up some suspense, other teams would talk to him about a front office or advisor position and really put whoever the GM was on the hot seat to actually make a move or lose their gig (COUGHbryanmurrayCOUGH), but for this to just be a matter of semantics; come on now.

But, the Leafs got their man a full half-a-season earlier than they expected. Burke will have full decision making abilities, which is something that he stated he wanted to have before he signed anything. A big question in this is the whole ordeal is who will be the first person gone once Burke takes over the position and what kind of overhaul he will make in order to make it his team and make it a successful one. Then there is the question of the clashing of egos of Burke and head coach Ron Wilson and if both can co-exist in peace.

Yet, the oversight about this could be whether this move is the best for the team right now. Looking at the team right now, they aren't doing half-bad. Sure, they're 11th in the East and the injury bug has took its toll, but all things considered-- it's better than some would have thought. If Burke comes in and makes drastic changes that don't help the team; will he still be hailed as the savior that the Leafs faithful wanted and will MLSE second guess their decision making process after all is said and done.

Of course, Burke hasn't yet taken over the helm and all scenarios are just hearsay. Burke has a Stanley Cup to his name and has been talked about like he's the greatest GM in the modern NHL, so you have think anything is a step-up from having an interim GM who is a puppet to the team's board of directors. If Burke can make the moves to make this a playoff team, then he could be the miracle man the Leafs were hoping would come free. Even if he comes close, they'll look at this as a genius move at the early jump upon things.

The thing that is known, at least for now, is that from this point until the foreseeable future; it'll never be a slow day when it comes to Toronto hockey news.
Posted by ScottyWazz at 6:23 PM