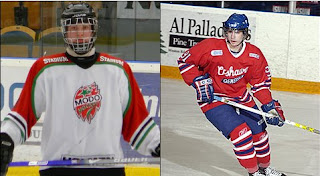 Today, the NHL's Central Scouting Bureau released their preliminary rankings for the 2009 Draft in Montreal this June. There's not much of a surprise in any rankings, with John Tavares leading the OHL charge, Victor Hedman leading the Euros, but Jared Cowen slowly sneaking up between the two of them and making his case to be a #1 overall pick. With Tavares' stock dropping and Hedman sidelined with a shoulder injury, this could be Cowen's chance to shine.

Cowen really started to come up with the ISS Top-30 having him ranked third behind Hedman in 1st and Tavares 2nd. At 6'5 and 218lbs, Cowen could be considered a North American version of Hedman, which may entice some teams if they have the top pick to take Cowen over Hedman with the transfer agreement stuff that's going on and whether or not Hedman wants to come over immediately.

One guy who could be a dark horse in all of this could be Zack Kassian in Peterborough, who seems like he could be turned into a solid power forward at 6'3 and 205lbs. With a lot of help this off-season, Kassian has turned into a top scoring threat for the Petes after a lackluster season last year, which saw him put up 21 points in 58 games. Through 19 games, Kassian already has 22 points and seems to be poised for more ahead to show off his stuff to the scouts. His injury history could be something that turns teams away, but he could be a solid top-10 choice if he keeps healthy and keeps scoring.

Here's the NHL CSB's rankings by league and country, and-- they open in a new window.

Ahw my little Jared Cow Cow! I love when people notice my Chiefs.