The Vancouver Canucks officially released their third jersey this afternoon....and it's really uninspired. Basically, it's the same jersey design with a different logo and shoulder patches. 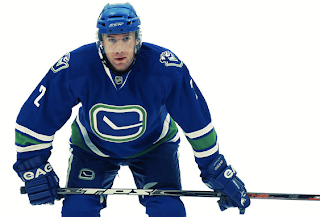 As you see Mattias Ohlund displaying the jersey, it's a modified version of the stick-in-rink design that they use on their normal shoulder patches.

Now, as I mentioned with the Bruins design, I don't understand why a team would have an alternate jersey the same color as the home jersey that is used, yet-- the Canucks have taken this to another level. Not only is it the same color, it's the same jersey. How is that an alternate?? How can you claim it as an alternate if it's the same friggin' thing?? At least the Thrashers made an effort to make some kind of alternate, as hideous as it may be.

The only really bold change to the whole jersey is that the white striping is thicker at the hem and arms, but that's about it. That's the only vast difference of the entire jersey set. People will still buy it because the Canucks fans like the stick-in-rink design that the team uses, but I don't see why they wouldn't have made that the logo when they came out with the redesign last season. It would have completely made it an epic win rather than have people wonder why "Vancouver" was put above the orca logo.

There have been some leaks to the San Jose Sharks third, but until there's a better picture, I won't be critiquing it as of yet.
Posted by ScottyWazz at 2:14 PM

I completely agree with you! I hate the third jersey. What is the point of having the exact same thing in general. I think something in green would be a nice change. my thoughts http://jib-sports-culture.blogspot.com/2008/11/canucks-third-jersey.html