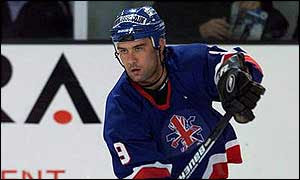 Tony Hand is on the verge of something great. Hand currently stands at 3,999 points for his career and has a good shot at reaching 4,000 points when he plays this weekend. Why haven't you heard a big deal about this?? Well, there's a good reason for that. Hand plays for the Manchester Phoenix in the British Elite League and has for all of his 3,999 points. With many of its own fans calling it glorified beer league, odds are the North American fan contingent wouldn't recognize Tony Hand if he suited up at all.

Hand was the first British trained hockey player to be drafted by an NHL team when the Edmonton Oilers picked him in 12th round in 1986. Hand was brought over and played in the WHL for the Victoria Cougars netting four goals and four assists in three games....but got homesick and has never played outside of the British League since.

A question was brought up by our buddy Anthony over at the FOHS boards wondering how long it took for players to be nominated for the Hockey Hall of Fame after they had retired. Of course, it's three years-- but it makes me wonder that even if Hand retired shortly after he netted his 4,000th point, would the HHOF committee even recognize him as a viable candidate for entry??

Let's not be stupid, 4,000th points in any league is an amazing feat, but when you think that most North American hockey fans didn't know there was a true British Hockey League, despite Theo Fleury's venture to the league a few years back; odds are the selection committee wouldn't be too keen on putting this accolade amongst those of NHLers, elite Europeans, and other top North American ilk. Considering that Hand did this under the radar of everything, it would take a big, big feat for him to actually be put into the pot for consideration.

Yet, playing the "what if" card, you wonder what Hand could have become had be stayed in North America. Eight points in three games in the WHL makes you wonder how good he could have been. Even with the British League, the point totals he has is phenominal and appears that he makes the game look easy when he's out there on the ice. Every year, he has totaled more than a point-per-game and doesn't seem like he's slowing up, even at 41 years old.

The feat itself is amazing within itself and will surely get him into the IIHF Hall of Fame, but odds are that despite this amazing showing of skill, despite his longevity and he's a British hockey legend; the odds are that he won't even get a sniff at the Hockey Hall of Fame; which is a damn shame.
Posted by ScottyWazz at 11:22 AM