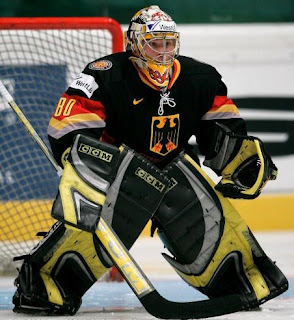 It's a chant that graced many an ECW event when it came to Tommy Dreamer, but nothing could be more apt to say about someone the likes of Robert Mueller. If you're not familiar with the Caps prospects or international hockey, Mueller is probably an unknown; but he is a former pick of the Caps and has been the German national team keeper for a while now, but his story from the past few weeks and months is incredible and shows how hardcore he is.

This was presented to me, first via Lil' Jimmy's blog and then it got picked up on the FOHS boards via the IIHF website.

Mueller was diagnosised with a brain tumor in 2006 when he had migraine symptom and started to have seizures and changes in his personality. The tumor was removed and it only took two months for him to return to the ice. Mueller played the '07-'08 season with Kolner Haie and had a very solid campaign at 13-4 and a .916 save percentage. He got his team into the DEL finals and was the best goalie in those playoffs. Then, Mueller played in the World Championship and was stellar in those performaces he put on.

Yet, in August, Mueller underwent another surgery to remove another tumor-- but it was revealed that it won't go away as the cells in his brain aren't fighting against the treatment that has been given to it. Mueller's sickness is terminal and he has already outlived the median time given to most people who get this. What's more rare is that this only effects two or three out of 100,000 people in the world.

However, in all of this, Mueller has never given his sob story to people and even asked his doctor how long it would take for him to get back on the ice rather than how long he has to live. He said he doesn't want to burden people with his problems

This not only shows how much he loves the game of hockey, it shows the spirit that he has. He wants to live for each day, he wants to live for each moment because he doesn't know how long it will last for him. He clings to his family, his hockey, and his spirit to try and make a comeback with Kolner Haie, which started with him being the back-up on November 15th, as Kolner's previous back-up broke his ankle.

On the 16th, Mueller returned to the ice to play in seven minutes of Kolner's game. It brought the crowd to its feet. Mueller may not be able to play an entire game or even start from scratch, but he was able to withstand those seven minutes, which could be the stepping stone to something more for Mueller this season.

If you really want to make this a crazy ending is to see him suit up for a NHL game and play some minutes to have his name in that book, but Mueller seems to have no desire to do that right now. He'd rather stay at home in Germany and be with the people he loves, the people who supported him from day one and gave him the wheel for the National team and made him a folk-legend in Germany.

Mueller really shows the true spirit of a human being to just do what he needs to do to make him happy rather than wallow around in self-pity and waste any time on this Earth over things he can't change. His will and playing style may be the only things that haven't been affected by the tumor that's in his head.

When people look back at his life and career, they probably won't think about how great he could have been if he life was indeed cut short due to this; rather they will say what an amazing career he had and what he did in the short span of time he did it in.
Posted by ScottyWazz at 8:17 PM