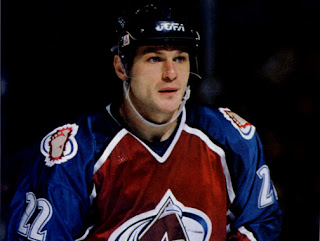 It seems that Cladue Lemieux's bid at an NHL return may come to fruition as he signed a try-out contract with the San Jose Sharks. That's right, much like Barry Melrose, Lemieux is trying to come back to a league, even though the game's speed and skill set may have passed him by a few years ago.

While the Sharks GM, Doug Wilson, is good friends with Lemieux, what's the point behind it?? Sure, Lemieux played with the Sharks' Asian satellite team, the China Sharks, collecting one assist in two games; but the last time Lemieux even played at a high level was in the '03-'04 season when he played in Switzerland for seven games. I can't see why Lemieux would be such an asset for the Sharks right now, especially considering that the Sharks are the best team in the league right now and really don't need any help from any outside force.

And while Lemieux could bring some veteran leadership and experience to the team-- the real question is will he be effective on the ice at all. He's trained with the Arizona Sundogs of Central League to get into shape again, but at 43 years of age-- how well will his conditioning be to finish out the last 50-60 games plus playoffs??

Lemieux really has nothing to prove. He's done it all and really doesn't need to show what he can and can't do on the ice. He has two Cup rings, a Conn Smythe trophy, and one of the most infamous checks in the game which sparked a great rivalry in the late 90s. Why, of all times, would Lemieux want to come back after playing his last NHL game some five years ago??

Best of luck to Lemieux in his comeback and here's hoping he can prove....whatever the hell he's trying to prove, really. I don't know if anything will come to it, but if Lemieux can play in a NHL game this season, it could be the most random (and maybe unnecessary) return the NHL has had.
Posted by ScottyWazz at 8:29 PM