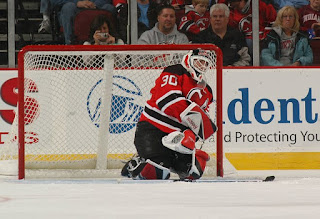 In the midst of a 6-1 beat down of the Atlanta Thrashers, the New Jersey Devils displayed a big reason why it may be a good idea to play your back-up when you're against the second-worst team in the league.

Almost seven minutes into the second period, Martin Brodeur let the game with an injury to his arm. Granted, if you listen to Al Strachan, even with Brodeur holding his arm close to his body, Brodeur suffered a groin injury and also Jon Bon Jovi is drawing up a better "umbrella" power play set up....though that should be better left to Rhianna.....get it?? Moving on.

Now, I'm not one to tell the Devils coaching staff how to do things, and I know that Brodeur is in the midst of gaining the all-times wins record, but maybe this was hockey karma telling the Devils they should have let Kevin Weekes have this lay-up of a game. It's not like it's going to kill you to let him have some PT for games like this and the Islanders every now and again. Not only does it keep Weekes sharp and allows him to show off if he's worth having as a back-up, but it'll give Brodeur to rest-- which is something he may need if the Devils are going to make a strong run in the playoffs, if they can get there.

However, that's all something that's a moot point at least right now. With the injury to Brodeur catching arm, it could take some time for him to heal, depending on the serverity of the injury. That pretty much hogties the Devils to actually play Weekes and hope to hell that Scott Clemmensen isn't plucked off waivers if he's called up. Now, if the injury isn't too severe, the Devils wouldn't have to risk Clemmensen and call up Dave Caruso, who will no doubt remove his glasses and say "It seems that the devils.....are in the details" with the classic The Who accompaniment.

However, for the time being, Devils fans are holding their breath-- and this time it may not be because of the sulfur smell coming from the state itself.
Posted by ScottyWazz at 8:16 PM