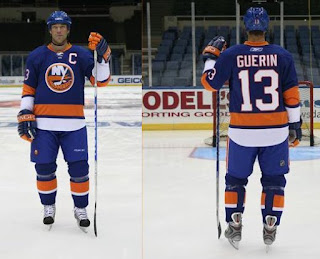 First off, you'll see how happy Bill Guerin looks in the new third jerseys. Maybe he's just elated to play on Long Island. Whatever it is, gotta love the captain's excitement about not only the jersey, but the team as a whole.

Anyway, this Islanders jersey is continuing in the retro theme of the Oilers and Leafs. However, the numbers on the back, the name on the back, and the captain's "C" look very huge on this jersey. Obviously, they are trying to keep the same feel of the era it came from in this modern design.

One thing that really gets me is the immediate stop on the back of the socks. Reebok has the ability to keep the new sock and let it go all the way around the sock, as well as make and immediate drop off of the stripe like seen on the Lightning and Senators socks.....but for it to immediate stop in the back with no rhyme or reason to, it's shocking to me.

All around, it keeps the feels of the era it came from and is a solid effort from Reebok on this one. I don't know what to expect with some of the bad ones that could be coming along.
Posted by ScottyWazz at 9:02 AM