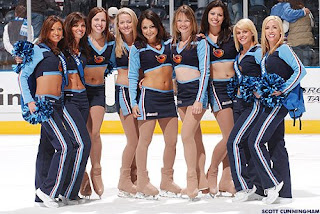 I use this picture to try and ease the pain of the Atlanta Thrashers fateful.

Brought up by the Falconer, continued by Lil' Jimmy and Shynner (with my suspect that it's almost the same effin' post), but guess what kids, the Atlanta Thrashers could be the newest contestant on the hit hockey game show "Which Hockey Team Below The Mason-Dixon Line Wants A New Zip Code" or NAMBLA for short (credit: Jon Stewart for that gag).

That's right, after the sparlking report that the Thrashers' season ticket racket is down 40% from last season and that the owners of the team are entrenched in a legal battle that'd make the Predators impressed; it seems that the Thrashers future in Atlanta could be coming to a close soon. Of course, last season, you have to look at the Thrashers a season after their first playoff appearance (if you want to call it that) and the hint that they could be building on something good-- man, were they wrong.

But didn't we learn this from the Flames back in the '80s and the Braves from their mini-NL East Dynasty-- Atlanta isn't a sports town. I'm sorry, when you have a team like the Braves who dominated the NL East for the longest time and they still can't sell out opening days in a new ballpark, you have issues. It's a front-running city, which there's nothing too wrong with it for fickle sports fans, but when you're trying to run one of these teams-- it's horror.

It's not like the team doesn't have a future. They have a guy in Ilya Kovalchuk, who is one of the top goal-scorers in the league, they have Kari Lehtonen, who has the potential to be a top-tier goalie, and they have a solid young blueline to come up in the future....so long as they aren't traded away for pucks.

And that's where the whole issue is-- Don Waddell. There's a thought that the mis-management of the Thrashers is all to blame on Waddell. With the recent Ondrej Pavelic situation, you'd have to wonder if that's the right way to think or if you could think any differently. If you change who's in the GM role sooner, could this situation be as bad as it's gotten?? Would the deals that Waddell made ones that an outside opinion would make?? Did they benefit the team in the long-run?? Okay, that one is obvious-- it didn't.

Far be it from me to question an NHL GM, but it's armchair GMs like myself who are the ones who decide if they want to shell out the cash to see these teams in person or kick back on the couch and watch it from home. Those are the people you need to apease in order to keep a fan base. Granted, hindsight for many is 20/20, but it is what it is. You have to pander to the fans if you want to be successful, which-- even then-- isn't always successful. Winning helps pander, but mismanagement just angers fans and makes them dive off the bandwagon.

In the end, we'll see what happens with the Thrashers. They seem to be a prime candidate for the Jim Balsillie phone list, but time will tell if he wants to risk an investment like that. In the end, the biggest question is this-- did Lil' Jon renew his season tickets??
Posted by ScottyWazz at 7:31 PM