Publicity 101 or Should Goalies Be Able To Wear The "C"?? 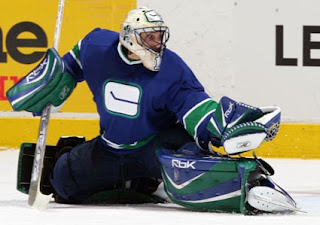 If there's one way to create a buzz throughout the blogosphere and hockey media (some can say it's one in the same), it's to buck tradition and go all out. It's worked for the Tampa Bay Lightning and their craziness this summer and it seems to be creating a buzz now as the Vancouver Canucks named Roberto Luongo team captain, making him the first "official" captain since Bill Durnan in '47-'48 to come from the goaltending fraternaty.

Granted, it's really only a sentimental pick, as Luongo can't wear the "C" or talk to the officials or take ceremonial face-offs-- that'll be left up to alternate captains Willie Mitchell and Mattias Ohlund.

However, it begs the question whether or not goaltenders should be allowed to wear the "C" if they are deserving of it. Honestly, on teams where there are no other solid options-- why the eff not?? Had the Capitals known about this a few years back, they could have been the ones who made this buzz by naming Olaf Kolzig captain. At that point, the Caps could have used all the publicity they could have used.

Though, there's the Pandora's Box thought that many teams will do the trend of naming goalies captains to get the buzz going when there are others on the team more deserving of the honor of being named captained.

That said, I can't think of many team who would consider their goalie their leader on the team. Just thinking through the squads and those who haven't named captains, I wouldn't pick the goalie on any of those teams that would actually think the goalie would be a viable option. Most team wouldn't have thought about the goaltender wearing the "C" unless they were in real dire straits, much like the Caps were back after the lockout happened in '05.

Yet, the underlying question is why is this rule still on the books?? I understand that goalies can't come past the blue line to dispute a call, but come on-- the fact of the matter is that many goalies shout at the refs on a goal call or possible interference, so it's almost old hat for them. And thinking about it, that's why they have alternates, to do things that the captain can't really do-- and begs the question of if there's a captain; why have alternates?? Okay, maybe that's a little extreme, but the NHL has done away with some archaic rules as it is and seem to be able to change the rulebook at their will, so why not take out this 60-year-old rule that doesn't seem to fit.

Luongo can take solice in a couple things to come from this. First, since he plays almost every game, it's pretty solid of him to be named captain because he'll be out there more often than not, especially now. Second, it shows his true worth to the team and make him think about wanting to jump ship when the chips are down in the Canucks season. Finally, he'll at least have one "C" on his jersey thanks to the orca logo on the Canucks jerseys.
Posted by ScottyWazz at 8:15 AM

It is a head scratcher. I mean, at first it seemed weird that the Canucks would name Luo capt. But after thinking about it does make sense. So let him have the C. My W team is down a captain still. They should put the C on my goalie...