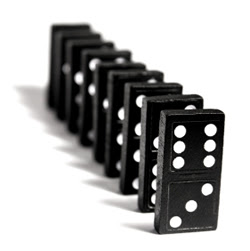 Denis Savard set the standard already for the 2008-09 coaching carousel by getting canned four games into the season in favor of Joel Quenneville, but now the question is-- since the first domino has been hit; who's going to be the next to tumble?? There are plenty out there who could definitely be ousted, but only a couple have a serious chance of getting their walking papers.

First up, Randy Carlyle. After a dismal 1-5 start, odds are the Anaheim Ducks head man is going to be the top candidate to be ousted next. While he was able to right the Stanley Cup champions banner for two years, as well as a big hangover from last season-- odds are that if the Ducks are going to be a contender, they need a new voice at the head of that ship. Carlyle's message may be lost or the teams are just that much better than the Ducks, but they need to get things righted before the team goes completely south for the winter. Heh, a migration joke-- get it??

Second would have to be Mike Keenan, but like I said in a previous post, I don't think that's the best route for the Flames. Keenan can be a hardass, but in the end-- he could be what the Flames need to keep them going and keep them hungry. If the Flames management give into demands, they'll be in another Jim Playfair situation where the players like the easy-going demeanor, but the thirst for success could be something that is lacking should they make the playoffs.

While it's only five games in, maybe Barry Melrose isn't the best idea for a coach in the "new" NHL. He's been out of the game way too long and it's showing that he could be not what the Bolts needed. Granted, he has been taking action by calling out his team two games into the season and limiting the minutes of their young star Steve Stamkos; it could be those things that the ownership didn't count on when hire him....or signing the players they did. It could be a stretch, but if things don't get better-- Matthew Barnaby may have to make room for Melrose back at ESPN.

John Stevens is a young coach and did a lot for the Flyers last year, but some reason-- they aren't clicking this year. Is this the time for Stevens to step down as an assistant?? Sure, it's five games in, but the Flyers have been losing leads late and haven't had the spark they had last year to start the season. With the Philly fateful very demanding, it could be time for Paul Holmgren to make a chance, which may start behind the bench.

Granted, I said that Barry Trotz was going to be the first guy out, but the Predators have been doing somewhat solid. It's been a long time for Trotz behind the Preds bench and he could be on a tight leash this season-- but he's getting things done for now, yet be sure that David Poile could be looming over Trotz in the shadows. I'd say Trotz's neck is on the line.....but that would require him to have one.