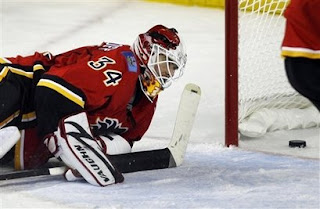 Living in this city, you can almost hear the wheel of the Calgary Flames bandwagon coming off. You can see the effigies being built for Miikka Kiprusoff and/or Mike Keenan. You see the confusion in people's eyes when they look at Todd Bertuzzi leading the team in goals and second in points. The embarassment of the fact that only Daymond Langkow, Andre Roy, and Eric Nystrom are the only rostered players that are not a minus.

Things are going bad for the Flames, but this isn't like any ordinary October slump however. There is no joy in the Saddledome. There is no ray of light that could be beaming through-- especially after two losses to the hated Edmonton Oilers. I won't say that they can't bounce back, because they have 77 games left to make up for it-- however, that being said-- something needs to be shaken up and quickly. With only one win in those games, all of them close...a drastic change may be needed to wake up the Flames.

What's the move though?? Do you fire Mike Keenan and bring in someone who is a little more, let's say, likeable; behind the bench?? Do you bench Kipper and see what Curtis McElhinney can do?? Is there something to wake up guys like Jarome Iginla and Craig Conroy?? What can be done in order to right the ship??

Personally, I think you need to send a message to Kipper. You don't want to make a knee-jerk reaction and fire Keenan, though it may be what's needed, you have to keep him back there for experience. Kiprusoff has always had bad Octobers. Maybe this is the year you give the back-up some looks in the early going so that maybe Kipper can settle down and get focused again. Plus, who knows what McElhinney can do if he's never given the chance.

However, with Iginla, there's only so much he can do to get himself up and only so much others can do to keep him help. There's no doubt he's the heart and soul of this team and he's doing all he can. I'm sure he'll catch his stride, but he's been stiffled so far, which may get him frustrated and off his game enough to completely ruin his first month of the season.

Bottom line, something has to be done because if this funk last too long, it could be a time to trade away for the future, as drastic as it may sound.
Posted by ScottyWazz at 8:18 AM