Depending on what you think of their play, the roadkill line could be fitting for the Coyotes-- but that's not what I'm really alluding to. The fine folks over at Icethetics apparently leaked the new third jerseys of the Phoenix Coyotes, another black uniform design. The picture is provided by Icethetics as well, as the watermark tells you already 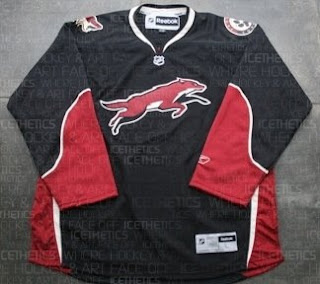 Now, I don't know how to feel about this. The front logo itself is kinda meh. I don't think that a lone object appearing like it's jumping doesn't end up getting it's desired intention and makes it feel like, well, the roadkill that many thought when the the grainy pictures started to come out in early September.

As far as the color scheme, it looks alright on the surface, and I do like the alternate paws logo for the one shoulder, but I'm not sure how it's going to look with the maroon that the Coyotes have for helmets, gloves, and pants. There's always a thought that could pull something like the Hurricanes and Oilers and have an alternate black pair for the jerseys, but I don't know if that's a trend that many team are willing to keep up for a long time.

We'll have to see how it appears on the ice when all is said and done, but it looks like a solid effort and much better than Atlanta's choice of third jersey options which still bugs and disgusts me to no end.
Posted by ScottyWazz at 7:12 PM