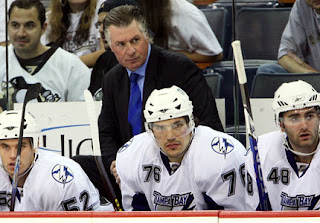 After a pair of 2-1 defeats, Barry Melrose and his stylish coif were a bit upset for the lack of production on the shot chart and scoresheet for having 139 forwards on the Lightning roster. Only two goals and 40 shots in 120 minutes of play will make for a long season, especially when giving up 80 shots. Lucky for Melrose, his goalies were ready, only letting in four goals.

Yet, the same concern that Melrose has now, are the same that many pundits had when the roster was finalized. In an article of the Czech media bashing the boring games between the Bolts and Rangers, Melrose had a great quote regarding his defense: ""It's not like we can airlift six veteran D in here tomorrow."

After letting up 80 shots in 120 minutes and getting thoroughly trounced 63-20 in the first two periods' SOGs combined of both games-- you have to wonder if the defense will lobby for a five period game so they can get used to the first four minutes and be able to play the next sixty. While it may take some time for the the youngsters to mature-- they better do it pretty effin' quick because there's no room for error.

That's why it's a concern for many. It's not like there's a mix of vets and young guns on the blueline for the Bolts, it's all young guys, all guys who may have a bright future; but lack the experience needed to counteract the barrage they'll be seeing this season. When you consider the money that the new owners were willing to throw around-- you may think they could have made a play for Brian Campbell or Rob Blake or even Mathieu Schneider if for nothing else but for some experience to help mentor these kids and maybe take some pressure off the youngsters.

More over, after the weekend, Melrose said that his top guys need to play as well as the bottom six on the depth chart and that he hoped the players were embarassed with their play during one of the periods because he was sure the ownership and management were.

You can question Melrose being out of the game for a while and that he may be lost with the new rules and everything to open up the game; but he's doing the right thing by calling out his guys now rather than down the line. It's only two games in and if Melrose can light a fire into his top guns early, then you can right the ship before it starts getting too bad and the in-fighting happens.

Of course, this could have a negative reaction and if the harking keeps happening; it'll get real old, real fast and things could get really bad in Tampa Bay. If the Bolts wanted the attention on them, they certain will get it because if the lack of production keeps happening-- they'll be under every media microscope as far as the internet can reach.
Posted by ScottyWazz at 6:00 AM