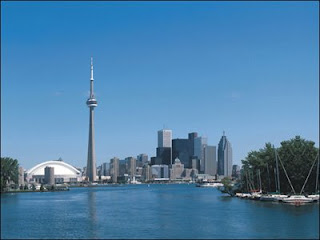 The Globe and Mail is reporting that there's some murmurs from some on the Board of Governors that the Toronto market is big enough for a second team. Also, from these murmurs-- the sky is blue and ice is cold. Not only is the market big enough, but there are enough media outlets to be able to cover both of them. Gotta love it.

The big hurdle is the Toronto Maple Leafs. Maple Leaf Sports and Entertainment President Richard Peddie said that they wouldn't outright deny the idea, which of course means that they'll wait to see the compensation they would receive before they say yay or nay to the whole thing. Peddie said the Leafs wouldn't be hurt, but I think that in the back of his head he hopes that things would get better so they could actually be taken seriously when they say they wouldn't mind.

Yet, my thought is why has it taken this long for some "serious" talk about this to be brought to the table?? Obviously, there has been some just random water-cooler talk about the idea of bringing two teams to the GTA, but nothing too, too serious. If it took this long to think about it, how long would the execution take for it to happen?? Especially considering the Maple Leafs stranglehold on the market up there, why would they want to give up any of that?? As much posteuring as they do trying to look like they'll be inviting to the idea, you know they want to keep all the money for themselves and keep the attention on them.

One of the more self-serving quotes from Peddie was him saying MLSE could make money off of renting ice to the other team. Listen Richy and the rest of those jobbers, if Balsillie gets the team-- you can bet he would put up money for a new arena for himself and go against Air Canada Centre in terms of getting concerts and events there. Then, you can bet that the war would be on when it comes to the Toronto market in everything from hockey to the next Rolling Stones farewell tour.
Posted by ScottyWazz at 8:35 AM