Two more third jerseys come out, not the best of times, not the worst of times.....but times nonetheless. 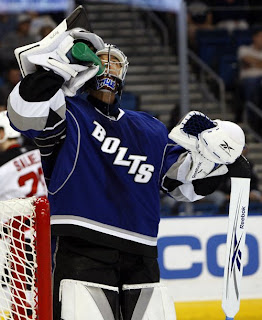 First, we'll let Olaf Kolzig get this drink while we look at the new Bolts jersey. I have to say, they pulled it off a lot better than the Senators have, though I'll say the Sens one grew on me if only for the look of the jersey and not what's on the crest. The great thing about the Bolts jersey is that they keep the stripes under the arms, which has been there since the teams' inception back in '92-'93. And while it looks like a little bit like the '02-'03 AS jerseys, it give a solid effort in terms of putting a wordmark on it. 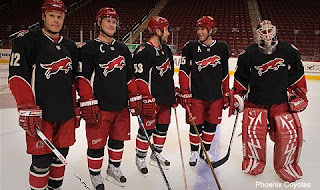 Now, we get to the fail. We talked about the Coyotes' jersey when it was leaked and debated whether or not it was roadkill or not. However, I said wait until the whole uniform was presented. And let's say I'm not a fan. Sure, they added the black socks-- but the whole maroon helmet, gloves, and pants ruin it as a whole, not to mention the right-handed captaincy letters. If the Coyotes went the way of the Hurricanes and gone all black-- it wouldn't have been that bad.

So, that's it. That's all the third jerseys to be unveils. You can look at the tags, or go to NHLUniforms.com and check out the display of the '08-'09 jerseys, as well as check everything out there because it's a great database.
Posted by ScottyWazz at 9:03 AM