It's Gotta Be The Stick 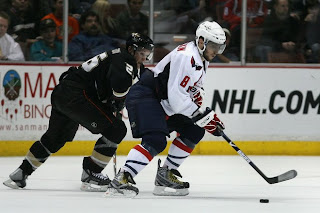 This just in, Alex Ovechkin in back. In his last five games, Ovechkin has six goals, 14 points, and he ate the bowl (apologies to Sid Seixeiro). In his eight games since his return to the line-up, the reign MVP has 17 points and many wonder what could be the reason.

Some believe it's the fact he took a hiatus to clear his hear back in Russia and deal with family issues that he had lingering over him. And while that could be the case, the answer could be as simple as Ovie switching stick manufacturers from the CCM U+ line to the Nike/Bauer Supreme line. It may not seem like a big deal, but for players; changing sticks could be one of the hardest transitions made by someone, especially for a player like Ovechkin. It could be the slightest change that could make or break how one plays, shoots, passes, etc.

It's unknown why Ovechkin made the switch, but there are some theories out there that could be valid. Ovechkin could be fed up with CCM sticks breaking on him. That seems to be a common problem for CCM, as Vincent Lecavalier recently switched from CCM to Warrior sticks. However, the contract for equipment and sticks could be different, as was the case with Sidney Crosby when he entered the league, with a sponsorship by RBK for equipment and Sherwood with sticks.

Another theory is that Ovie's CCM contract is running out and could be signing with Bauer when that happens. With Nike dropping out and Bauer staying around, it may be in their best interest to have some of the top young guns to roll out the brand. Bauer already has Evgeni Malkin and Steve Stamkos under the company banner.

Whatever it is, it has seemed to get Ovechkin out of his early season slump and giving Caps fans (as well as fantasy owners) something to really cheer about when it comes to Ovechkin. As if they didn't have enough to cheer about with him being out on the ice already.
Posted by ScottyWazz at 11:28 PM

"It's Gotta be the Stick"

In the words of Michael Scott