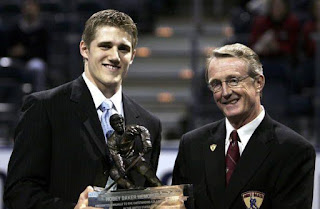 Welp, it seems that the Tampa Bay Lightning are making news again, surprise. This time, they traded away Matt Carle and a draft pick to the Philadelphia Flyers for Steve Downie, Steve Eminger, and a draft pick. Carle was previously acquired this summer from the San Jose Sharks for Dan Boyle.

It's not just the fact the the Bolts traded away a good, young project like Matt Carle for whatever reason, it's that they traded him for two player who will probably be up and down for the remainder of the season. Downie has been described as a trouble-maker on and off the ice, as well as being a little overly aggressive on the ice, which puts his team at a disadvantage. Eminger hasn't yet found the offensive stroke that made him a first round pick in 2002 and really has been buried in depth charts because of his inability to control the puck or do much of anything with it.

You have to wonder what's going through the heads of the Bolts brass when making a deal like this. There's enough forwards on the Bolts to field two full lines, five players, of forwards on the ice alone. Not only that, but you downgrade your defensive corps from a promising young project to a possible flop on the line. Eminger will not flourish in Tampa, if anything he'll flounder even more. With his lack of defensive prowess (a career minus-44 in 224 NHL games) will not help the Bolts backline and will probably expose Mike Smith and Olaf Kolzig to even more shots. Hizzah.

On the flip side, it could be high time to talk about Paul Holmgren as one of the more genius GMs in the NHL today. Not only does he take a guy like Braydon Coburn from the Atlanta Thrashers for the equivalent of nothing, but now he picks up Carle for two guys who really weren't going to advance the team in the long-term sense. Carle will be an asset on the puck-movement side of things for the defense and will be a nice second line compliment to Kimmo Timonen in terms of making the first pass out of the zone.

All in all, the Flyers make out like bandits and the Bolts continue to make pundits heads spin.
Posted by ScottyWazz at 8:18 AM